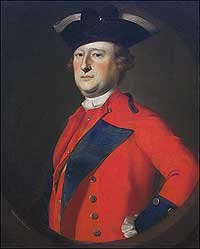 In 1731, with the intercession of the Duke of Dorset, Amherst received a commission in the Foot Guards.

In 1741, Amherst was appointed as aide-de camp of General John Ligonier. During the War of the Austrian Succession, Amherst served in this capacity in Germany and the Low Countries. He was present at the battles of Dettingen (June 27, 1743), Fontenoy (May 11, 1745) and Raucoux (October 11, 1746). When the Duke of Cumberland assumed command, he served in his staff, taking part in the last campaign of the war.

In 1756, Amherst was promoted lieutenant-colonel.

In 1757, at the opening of the Seven Years' War, Amherst was once more attached to Cumberland's staff during the French invasion of Hanover. On July 26, he was present at the Battle of Hastenbeck when a French army defeated Cumberland.

In 1758, Ligonier recommended Amherst to William Pitt. Accordingly, in mid January, Amherst was recalled from Germany. Due to winter, he could not leave before mid February. He finally arrived in London on February 26. A few days later, he was interviewed by the Lords. Within days, he was informed by Pitt that he had been promoted major-general and commander-in-chief of the expedition against Louisbourg in Canada. On July 26, his expedition captured Louisbourg and Amherst was promoted commander-in-chief of all British forces in North America, replacing Lord Loudoun in this capacity.

In 1760, Amherst's plan consisted of a three pronged attack on Montréal. He personally led one of these columns. On September 8, Montréal fell and with it all remaining French territories in Canada. After the conquest, Amherst was immediately appointed governor-general of British North America.

In 1761, Amherst was made a K.B. His conduct of the operations against the Indians under Pontiac was, however, far from being as successful as his generalship against regular troops.

In 1763, Amherst returned to England. Later during the year, he was appointed Governor of Virginia and Colonel of the 60th Royal American Regiment of Foot.

In 1768 the king, who had had a quarrel with Amherst, made amends by giving him another colonelcy.

In 1770, Amherst was made Governor of Guernsey.

In 1772, Amherst was promoted lieutenant-general of the ordnance and acting commander-in-chief of the forces. In this capacity, he was the chief adviser at headquarters during the American War of Independence.

In 1776, Amherst was raised to peerage as a baron.

In 1778, Amherst was promoted general.

In 1780, Amherst became colonel of the 2nd Horse Grenadiers (2nd Life Guards). The same year, he assisted in the suppression of Gordon riots.

Amherst spent the rest of his active life, with a short interval in 1782-1783, as commander-in-chief of the Royal Horse Guards. However, he was no longer capable of active service.

In 1795, Amherst was succeeded by the Duke of York as commander-in-chief of the Horse Guards.

In 1796, Amherst was promoted field-marshal.

According to Walpole, Amherst "was a man of indomitable perseverance and courage, but slow and methodical in his movements. Provident, conciliating and cool, Amherst disposed his operations with steadiness, neither precipitating nor delaying beyond the due point, and comprehending the whole under a due authority which he knew how to assume."