The regiment was created by a regulation of September 6, 1684. Indeed, expecting a Coalition to soon form against France, Louis XIV raised 30 new regiments from September 1 to 30 for the defence of the various places of the realm. By raising one regiment a day, he avoided any problem of precedence among these new regiments.

During its first years of existence, the regiment was not included in field units.

By 1688, at the outbreak of the Nine Years' War (1688-97), the regiment garrisoned Calais. In 1693, it was sent to Huy where it distinguished itself in the glorious defence of the place. The remnants of the regiment (only 150 men) evacuated Huy with the honours of war. After this feat of arms, the regiment was admitted in the filed units.. In 1697, it took part in the siege of Ath.

Meanwhile, the second battalion, which had been raised on 1 February 1701, served in Flanders and Germany. In 1703, it garrisoned Landau after its capture. In 1704, it took part in the disastrous Battle of Blenheim and in the unsuccessful defence of Landau. From 1705 to 1710, it served in the Lines of the Lauter. In 1711, it was sent to Dauphiné.

In 1715, the second battalion was disbanded.

In 1733, at the outbreak of the War of the Polish Succession (1733-35), the regiment served on the Rhine and participated in the siege of Kehl. In 1734, it took part in the attack on the Lines of Ettlingen and in the siege of Philisbourg; and in 1735, in the Battle of Klausen.

On October 30, 1748, the second battalion of the regiment was disbanded.

During the Seven Years' War, the regiment ranked 75th and was under the command of:

By August 1 1757, the regiment was garrisoning Monaco in Provence. 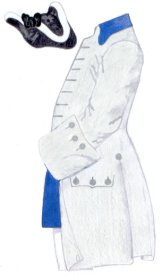 Officers wore uniforms similars to those of privates with the following differences: