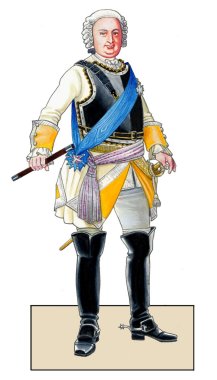 Friedrich Heinrich Eugen von Anhalt-Dessau was a German prince of the House of Ascania from the Anhalt-Dessau branch. He was born on December 27 1705 in Dessau as the fourth son of Leopold I, Prince of Anhalt-Dessau , the famous Prussian general known as "Alter Dessauer" and of his morganatic wife Anna Louise Föse. He was the cousin of Frederick II of Prussia.

In 1717, at the age of only twelve, Eugen joined the Prussian Army with the rank of Rittmeister (captain) in the future Cuirassier Regiment No. 6.

In 1732, Eugen became Chef of the future Dragoon Regiment No. 7.

During the War of the Polish Succession, Eugen took part in the campaign of 1734-1735 on the Rhine.

From December 23 1735 to July 7 1740, Eugen was appointed Chef of the Hussar Corps raised in 1730 which would later become the Prussian Hussar Regiment No. 1

From December 23 1737, Eugen also became chief of the Cuirassier Regiment later numbered KR6, a charge that he would retain until March 10 1744.

In 1740, Eugen was promoted to major-general.

Eugen took part in the War of the Austrian Succession (more precisely in the First Silesian War). After the unsuccessful combat at Kranowitz on May 20 1742, Eugen was criticized by King Frederick II and, on January 8 1744, abandoned his charge in the Prussian Army, left the Prussian service and joined the Austrian Army under the command of Prince Charles Alexander of Lorraine as a volunteer on the Rhine. The circumstances of his defection are not clear.

In June 1746, Eugen joined the Army of the Electorate of Saxony, where he became in February 1749 governor of Wittenberg.

In 1749, Eugen was appointed Chef of the former Cuirassier Regiment Schwarzburg-Sonderhausen, a charge that he would retain until his death.

In 1754, Eugen was promoted to General der Cavallerie.

In 1756, during the Prussian invasion of Saxony, Eugen commanded a brigade of cuirassiers. On October 16, he surrendered with the rest of the Saxon army at Pirna. Freed under “parole”, he refused to serve in the Prussian Army.

In January 1775, Eugen was promoted to Saxon General-Field-Marshal. In the War of the Bavarian Succession, he led the Saxons attached to the Prussian Corps of General Dubislaw von Platen.

Eugen never married or had children and never took part in the government of Anhalt-Dessau. He died on March 2 1781 in Dessau.

Dr Marco Pagan for the initial version of this article and Franco Saudelli for the accompanying illustration.

Harald Skala for the second version of this article.