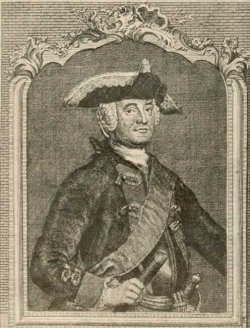 Prince Moritz, portrait by an unknown artist prior to 1760 - Source: German Wikipedia

Prince Moritz was the fifth son of Fürst Leopold von Anhalt-Dessau (1676-1747), also known as the "Old Dessauer", and of Anna Louise Föhse, the daughter of a pharmacist that Leopold had married against the wishes of the aristocracy of Anhalt. After the death of Eugène de Savoie in 1736, the "Old Dessauer" had been considered as the best general in Europe.

Prince Moritz considered a military career. On March 3, 1727, King Friedrich Wilhelm I gave Moritz a patent of captain of a company of Arnim Infantry, effective on April 27. At the end of the year, on December 9, Moritz exchanged this company for a company in his father’s regiment (Anhalt-Dessau Infantry), stationed in Halle.

On June 13, 1731, Moritz was directly promoted from captain to lieutenant-colonel.

From 1733 to 1735, Prince Moritz accompanied the Prussian contingent which took part in the War of the Polish Succession.

In 1736, Moritz became colonel of Anhalt-Dessau Infantry according to patent retroactively effective in 1732.

On May 31, 1741, during the War of the Austrian Succession (1740-1748), Prince Moritz became chef of his own regiment in the Prussian Army: the Prinz Moritz Infantry garrisoning Stargard. On July 31, 1742, Moritz was promoted to major-general. On June 4, 1745, he distinguished himself at the Battle of Hohenfriedberg. On July 20, he was promoted to lieutenant-general. Then on December 14 of the same year, at the Battle of Kesselsdorf, he led the Prussian left wing and contributed significantly to the victory. For his conduct at Kesselsdorf, Moritz was admitted in the Order of the Black Eagle.

After the peace of 1748, Frederick II entrusted Prince Moritz with the colonization of the remote region along the Oder in Pomerania.

In 1752, Prince Moritz was appointed governor of Cüstrin.

In 1756, at the outbreak of the Seven Years War, Prince Moritz took part in the Prussian invasion of Saxony where he led a corps which formed part of the centre column personally commanded by Frederick II. At the beginning of September, Moritz was detached from the centre column to seize Wittenberg and destroy its defensive works. His corps then took part in the blockade of the Saxon Army at Pirna. Prince Moritz and Frederick II had a close professional relationship occasionally punctuated by violent disputes. However, on June 18, 1757, at the Battle of Kolin, Prince Moritz commanded the infantry of the centre, which, through a misunderstanding with King Frederick II, was prematurely drawn into action and failed hopelessly. In the disastrous days which followed, Moritz was under the cloud of Frederick's displeasure. In October 1757, Prince Moritz was left with very inadequate forces to defend Berlin against the daring Austrian raid on Berlin by General Andreas Count Hadik auf Futak. But, on December 5 of the same year, the glorious victory of Leuthen put an end to Moritz's run of bad luck. At the close of that day, Frederick rode down the lines and called out to General Prince Moritz, "I congratulate you, Herr Feldmarschall!" thus promoting him to the rank of field marshal for his conduct. In July 1758, when the Prussians raised the Siege of Olmütz, Moritz accompanied Frederick to the Neumark to put a stop to the [[1758 - Russian invasion of Brandenburg|Russian invasion of Brandenburg. On August 25, Moritz took part in the Battle of Zorndorf where he brilliantly seconded Frederick and distinguished himself once more. At the beginning of October 1758, Moritz along with Marshal Keith advised Frederick against encamping at Hochkirch which he considered a very disadvantageous position. On October 14, during the night Battle of Hochkirch, Moritz fell wounded into the hands of the Austrians as he was being transported to Bautzen. From these wounds, Moritz suffered a blood poisoning. Prince Moritz was then released from captivity and returned to his home town of Dessau.

On April 11 1760, Prince Moritz succumbed from this blood poisoning at Dessau.

Digby Smith for his contribution to this article