The regiment was among the 37 regiments raised at the death of Philip IV of Spain in 1665, when Louis XIV resolved to renew his claims on Flanders, Artois and Hainaut. It was completed by January 15 1667. On March 20 1688, it was given to the second grandson of Louis XIV: Philippe d'Anjou and known as “Anjou Cavalerie”.

During the War of the Austrian Succession, the regiment initially operated in Bavaria from 1743 to 1745. It was then transferred to Flanders where it campaigned from 1746 to 1748.

In 1754, the regiment was stationed at Libourne.

When the French Cavalry was reorganised on December 1 1761, the regiment was increased to 4 squadrons, each of them consisting of 4 companies of 40 troopers, for a total of 640 troopers. The 2 additional squadrons came from Hericy Cavalerie. The newly formed regiment was renamed Artois Cavalerie.

In 1756, at the outbreak of the war, the regiment was stationed at Besançon.

In 1757, the regiment joined Army of the Lower Rhine commanded by the Maréchal d'Estrées. At the end of June, it was at the camp of Bielefeld with d'Estrées's main corps. On July 26, the regiment took part in the Battle of Hastenbeck where it was among the cavalry of the right wing. After the victory, it encamped at Grosselsen near Hameln with the main body of Army of the Lower Rhine from July 31 to August 2. At the end of the year, it took its winter-quarters in Emmerich on the Lower Rhine, in the fourth line of the French army.

From March 30 to April 4 1758, after the retreat of the French army towards the Rhine, the regiment was with the Comte de Clermont's army in the camp of Wesel on the Lower Rhine, in the first line of the right wing. In April, when Clermont redeployed his army along the Rhine, the regiment was stationed in the villages of Till, Moyland, Huisberden, Warbeyen, Grieth, Kaltenberg, Hasselt and Bedburg in the area of Kleve. After the successful crossing of the Rhine by the Allied army of Ferdinand of Brunswick on May 31, the regiment retired towards Rheinberg where it joined Clermont's Army on June 2. It remained in this camp, where it was placed on the right wing of the first line, until June 12. On June 23, the regiment took part in the Battle of Krefeld where it was placed on the left wing of the second line, under de Muy. During this battle, the brigade was one of the few who took an active part in the fighting to cover the retreat of Saint-Germain's Division. In Mid August, after Ferdinand's retreat to the east bank of the Rhine, the regiment, as part of the Army of the Lower Rhine now under the Marquis de Contades, recrossed the Rhine to follow the Allies. On August 20, it was encamped near Wesel where it was placed on the left wing of the second line. At the beginning of October, the regiment was attached to Chevert's Corps which was sent to reinforce Soubise's Army in Hesse. On October 10, it did not take part in the Battle of Lutterberg because it was part of Castries' detachment left on the opposite bank of the Fulda.

By May 23 1760, the regiment was part of the second line of Broglie's Army, placed under the command of the Prince de Croy. On July 10, the regiment might have been attached to Prince Camille's Cavalry Corps who arrived too late to take part in the Combat of Corbach. On October 4, M. de Maupéou's Corps (including this regiment) left for the Lower Rhine. On October 13, the unit arrived at Neuss with Castries. 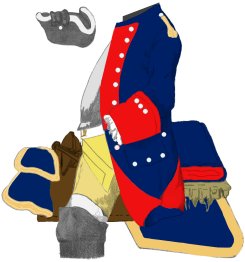 N.B.: by 1761 the regimental braid seems to have been aurore (light orange) with red and blue lizards