The regiment was created in the Saragossa from volunteers according to a decree dated July 6 1711. The cadres of the regiment consisted mostly of men from the Sagunto Dragoons. The regiment then joined the corps occupying the Kingdom of Valencia and took part in the recapture of Castellon de la Plana.

After the war, in 1714, the regiment was transferred to Extremadura. In 1715, it incorporated the former “Regimiento de Molina” as its second battalion.

In 1718, the regiment joined the army assembling for the reconquest of Sicily. Upon arrival, it took part in the siege of Messina and in the blockade of Melazzo. In 1719, it fought in the Battle of Francavilla before returning to Spain.

On 22 July 1726, the regiment incorporated the remnants of the “Regimiento de Barcelona”.

In 1727, the regiment took up cantons in Alagon.

In 1732, the regiment was sent to the relief of Oran. It remained in this place until 1734 when it returned to Spain.

In 1735, the regiment was transferred to Extremadura.

In 1740, the second battalion of the regiment embarked for Cartegena de Indias. In 1741, it took part in the defence of Cartagena de Indias against a British expedition.

In 1757, the regiment garrisoned Cartagena in Spain.

In 1760, the regiment was transferred to Old Castile where it garrisoned Zamora. On December 4, the second battalion embarked at Cádiz for Havana.

In 1761, a company of the regiment embarked for Puerto-Rico. In June, the 2nd battalion of the regiment (400 men) arrived at Havana aboard a flotilla of 7 ships of the line under the command of admiral Gutierre de Hevia.

In 1762, during the siege of Havana, the second battalion took part in the defence of the city who surrendered on August 14. From June 8 to July 30, it heroically defended the Fort del Morro. Most of the battalion perished when the British finally stormed the fort, including Grenadier-Captain Don Antonio Zubiria, Captain Don Fernando Párraga and Sub-Lieutenant Don Marcos Tort.

The same year (1762), the first battalion formed part of the corps of 10,000 men cantoned in Ciudad-Rodrigo for the planned invasion of Portugal. In the first days of May, the battalion set off from Ciudad-Rodrigo to garrison the Fort of Conception from where it fought the enemy guerilla. It was then sent to reinforce the army that was already in Portuguese territory. Part of the battalion was detached under Lieutenant-Colonel Don José Carbonell to join the column of Brigadier Don Ignacio Wagot to plunder the vicinities of Mallada Sorda. The battalion then retired to Extremadura and entered into the region of Tras-os-Montes and Alentejo to lay siege to Campomajor and Elvas. 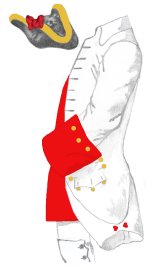 The coronela (colonel flag) of the regiment was white with a red Burgundian cross terminated in each corner by a medallion carrying the arms of the regiment (d'or à quatre pals de gueules) surmounted by a golden crown. In the middle: the arms of Charles III surrounded by the necklace of the order of the Toison de Oro (Golden Fleece).

The batallonas (ordonnance flags) of the regiment were white with a red Burgundian cross terminated in each corner by a medallion carrying the arms of the regiment (d'or à quatre pals de gueules) surmounted by a golden crown.