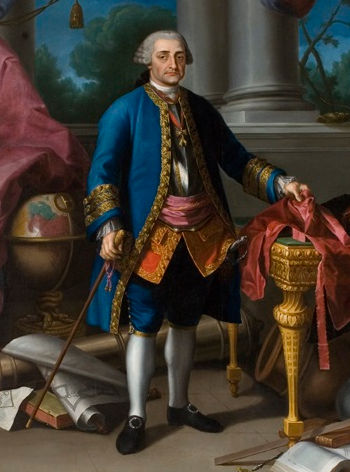 Detail of a painting of Pedro Pablo Abarca de Bolea, Count Aranda by Ramón Bayeu in 1769

Pedro Pablo attended school in Zaragoza. In 1726, he accompanied his family to Italy. He continued his studies in Bologna and Rome.

In 1740, during the War of the Austrian Succession (1740-48), Pedro Pablo once more served with his father in Italy. The same year, he was promoted to colonel of the Castilla Infantry. In 1742, at the death of his father, Pedro Pablo inherited the title of count and was appointed 10th Count of Aranda. In 1743, he was heavily wounded in the battle of Campo Santo. In 1746, Pedro Pablo quit military service and was appointed chamberlain of King Philipp V. In 1747, Pedro Pablo was promoted to mariscal de campo. He then made a journey to France and Italy.

In 1755, Pedro Pablo returned to Spain and was promoted to lieutenant-general and Grand of Spain.

In 1756, King Ferdinand VI appointed the Count de Aranda ambassador in Portugal. The same year, Aranda received the Order of the Golden Fleece in recognition of his merits. In 1757, Aranda was promoted to director general of artillery. In 1758, Aranda sojourned in his properties in Spain. In 1759, he returned to public service and was appointed ambassador at the court of the Elector of Saxony and King of Poland, August III at Warsaw.

In 1762, Spain joined France in the Family Compact to fight Portugal and Great Britain. On May 5, the Spanish army, led by Captain-General Nicólas de Carvajal Marquis de Sarria, arrived on the border of Portugal and camped near Carzajoles. On May 8, during the invasion of Portugal, Miranda surrendered after a powder magazine had blown up. The Marquis de Sarria was then replaced in command by Pedro Pablo Count Aranda. Under his command, the Spanish army laid siege to Almeida which surrender on August 25, after a short nine-day siege.

In 1763, Aranda was promoted to captain-general of the Province of Valencia, the highest rank of the Spanish Army. He enjoyed the personal confidence of the king, promoted many enlightened reforms and supported the expulsion of the Jesuits in 1767.

From 1773 to 1787, the Count of Aranda was ambassador to France. In 1792, after his return to Spain, he was appointed prime minister. After the proclamation of the republic in France, in September 1792, Aranda’s ideas appeared to be incompatible with the official politic of Spain. He was replaced by Manual Godoy and later on arrested and confined to Jaén. In 1793, after his release, Aranda retired to his estates in Aragon.

Aranda died on January 9, 1798, in Épila, near Zaragoza and was buried in the Monastery of San Juan de la Pena.