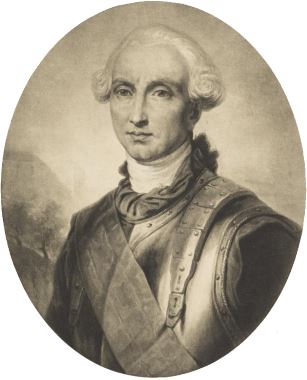 Louis was the son of Michel III de Conflans and of Diane Gabrielle de Jussac.

In 1717, Louis inherited from his father the charge of first gentleman of the chamber to the Duc d'Orléans.

During the War of the Polish Succession (1733-35), Louis d'Armentières served in Italy.

On May 15 1733, Louis married Adélaïde Jeanne Françoise de Bouterou d'Aubigny with whom he had three children.

On September 19 1734, Louis distinguished himself and was wounded at the Battle of Guastalla (September 19, 1734). He was subsequently promoted to brigadier.

In 1741, at the beginning of the War of the Austrian Succession (1740-48), Louis d'Armentières campaigned in Bohemia and was at the capture of Prague.

In 1742, Louis participated in the retreat of the French army from Bohemia to the Rhine, contributing to the capture of the town of Plan.

In February 1743, Louis returned to France where he was promoted to maréchal-de-camp on February 20, abandoning his charge of colonel of Anjou Infanterie before joining the Army of Alsace. He took part in the action of Rhinvillers. It was then transferred to the Army of Flanders where he served under the command of the Maréchal de Saxe.

On May 9 1746, his wife Adélaïde Jeanne Françoise de Bouterou d'Aubigny died. On October 11 of the same year, Louis was at the Battle of Rocoux and was charged to bring the news of the victory to Louis XV. On October 14, the king promoted him to lieutenant-general.

On July 2 1747, Louis d'Armentières fought in the Battle of Lauffeld before returning to command in Ath.

In 1748, Louis took part in the siege of Maastricht. After the capture of the fortress, he returned to Ath until February 27 1749 when the city was retroceded to Austria.

On January 1 1753, Louis d'Armentières was received as knight in the Ordre du Saint-Esprit.

In 1757, during the Seven Years' War, Louis d'Armentières initially took part in the conquest of Hanover. At the end of April, d'Estrées confided him the blockade and siege of Geldern. At the beginning of May, he took the last measures for the blockade which was then confided to Beausobre. In mid-June, when the Prince de Soubise was suddenly recalled to Paris, d'Armentières assumed command of part of the Reserve and marched on Paderborn. He then covered the right flank of the army during its advance. On July 8, his corps passed the Weser and occupied the Castle of Fürstenberg. By July 19, he had reached the Pass of Scharfoldendorf. and, on July 26, fought in the Battle of Hastenbeck where he commanded the infantry right wing. On August 8, d'Armentières was recalled to the main army with his corps. The Duc de Richelieu then gave him command of Broglie's former corps at Minden. He gradually advanced towards Bremen which he occupied on September 1. A month later, on October 1, he occupied Quedlinburg with his corps. At the beginning of December, during the Allied counter-offensive in Hanover, d'Armentières was instructed to retire on Halberstadt and Osterwieck. By December 30, his corps was posted at Celle.

On January 19 1759, the Marquis d'Armentières replaced Contades for the time of his sojourn at Versailles. He managed to contain the Allied spring offensive in Western Germany. For the Summer campaign, d'Armentières commanded a separate corps on the Lower-Rhine. In July, he blockaded Münster. On July 9, he invested Münster. On July 25, the garrison of Münster (Lieutenant-General Zastrow at the head of 3,500 men) surrendered as prisoners of war. When the Allies under General Imhoff drew once more closer to Münster, d'Armentières, seconded by the Marquis d'Auvet and the Vicomte des Cars, assembled his troops and repulsed them at Dorstein, Recklinghausen and Lünen as they were trying to intercept a supply convoy destined to Münster. Losing hope to drive the Allies back, d'Armentières finally took measures to obtain a honourable capitulation for the garrison of Münster. In October, during the Allied counter-offensive in Western Germany, he retired towards the Rhine. On December 27, d'Armentières quitted the Army of the Lower Rhine, leaving effective command to de Muy.

At the end of 1760, d'Armentières returned to France.

In 1761, d'Armentières was appointed commander of the Trois Évêchés (Metz, Toul and Verdun).

In 1770, Louis married Marie-Charlotte de Senneterre with whom he had one child.

On January 18 1774, Louis d'Armentières died of apoplexy at Versailles.

N.B.: the section on the Seven Years' War is mostly derived from our articles depicting the various campaigns, battles and sieges.