During the War of the Polish Succession, the regiment served on the Moselle in 1732. From 1733 to 1736, it campaigned in Italy.

In 1756, the regiment counted four squadrons and ranked 9th.

In 1786, the regiment became the “Chasseurs des Evêchés” or “2ème Chasseur”.

In 1756, at the outbreak of the war, the regiment was stationed at Saint-Malo.

By August 1, 1757, the regiment had joined the French army in Germany for the planned invasion of Hanover. At the end of 1757, it took up its winter-quarters in Sonsbeck and Kalkar on the Lower Rhine, in the fourth line of the army.

By June 1761, the regiment was part of Soubise's Army of the Lower Rhine. On July 16, at the Battle of Vellinghausen, the regiment formed part of the corps of the Prince de Condé. By the end of July, it was attached to de Muy's Corps. In September, the regiment was at the action of Ostende.

For the campaign of 1762, the regiment was once more part of the army of the Prince de Soubise on the Upper Rhine. By mid-July, it was at the camp of Helsa. On June 24, the regiment was at the Battle of Wilhelmsthal, where it was attached to the left vanguard under the command of M. de Stainville. On August 30, it fought in the Combat of Nauheim where it formed part of Stainville’s vanguard. On November 20, when Louis XV issued his instructions regarding the French armies serving in Germany, specifying which units should return to France right away and which should stay in Germany till the final evacuation, the regiment was among those which would remain in Germany.

In December 1762, a regulation introduced a brand new green uniform with lemon yellow as the distinctive colour. 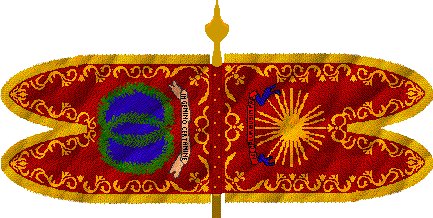 This article is mostly a translation Jean-Louis Vial's article “Aubigné Dragons” published on his website Nec Pluribus Impar. The article also incorporates texts from the following books which are now in the public domain::