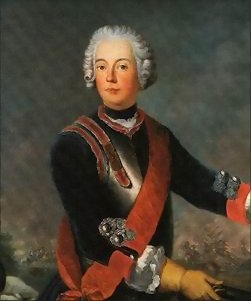 Prinz August Wilhelm of Prussia, detail of a portrait by an unknown artist - Source: German Wikipedia

Prince August Wilhelm of Prussia was the brother of Frederick the Great. He entered the army at an early age, as was the custom.

During the War of the Austrian Succession, in 1741, August Wilhelm was promoted to major-general in the cavalry. In 1745, he was promoted to lieutenant-general and in 1747 to general of infantry.

During the Seven Years' War, Frederick's defeat at the Battle of Kolin on June 18 1757 put a stop to the invasion of Bohemia, forcing the Prussians to raise the Siege of Prague and to retire from Bohemia. For this retreat, Frederick divided his army, initially entrusting one corps (52 bns and 80 sqns) to Prince Moritz von Anhalt-Dessau and then, from the end of June, to his brother Prince August Wilhelm who was seconded by Lieutenant-General Hans Karl von Winterfeldt and Major-General von Schmettau. At this point, Frederick's part of the army was around Leitmeritz (present-day Litoměřice), midway between Prague and Dresden, that of Prince Wilhelm was at Jungbunzlau (present-day Mladá Boleslav) on the River Iser (present-day Jizera) almost 100 km off to the east. Prince August Wilhelm was instructed to stay at Jungbunzlau for as long as possible and to maintain a ten-day supply of bread with the army at all times. From his position, he could advance east to the defence of the Fortress of Schweidnitz (present-day Swidnica) if the Austrians decided to invade Silesia. While stationed at Jungbunzlau, Prince August Wilhelm was also to raise reinforcements in Silesia and use them to escort convoys of flour to the army at Zittau and to scout out and report on all possible routes in the area. Prince Wilhelm found the magazines in Jungbunzlau to be empty.

On July 1, Field-Marshal Count Leopold von Daun crossed the Elbe with the Austrian main army and pushed a force under General of Cavalry von Nádasdy to within 7 km of Jungbunzlau. On July 3, Prince Wilhelm shifted his army to Neuschloß (probably Nové Hrady), 50 km westward. On July 7, leaving the direct route to Gabel and Zittau, the prince continued his slow retreat towards Böhmisch Lipa (present-day Česká Lípa) about 70 km south of Bautzen and 50 km north-west of Gabel. This was halfway between the king and Zittau. He then asked the king for the authorisation to withdraw to Gabel which Frederick granted. However, Prince August Wilhelm decided to remain at Böhmisch Lipa. On Thursday July 14, the Austrians attacked Puttkammer's detachment at Gabel. Upon receiving news of this attack, the prince summoned a council of war where it was decided to retreat to Zittau and to leave Puttkammer to his fate. Upon his arrival in the vicinity of Zittau, Prince August Wilhelm realised that the Austrians had arrived ahead of him and that they were already bombarding the town.

On 23 July, Zittau surrendered, while Prince August Wilhelm, with a force superior to that of the Austrians, was stuck in the woods about 10 km away. Following this disaster, the prince withdrew north-west for 5 days to Bautzen. He was not pursued, but his army dissolved behind him.

On July 29, King Frederick arrived at Bautzen. The atmosphere between the royal brothers was icy. As the prince sought to hand over his report, the king wheeled his horse and rode off. With the exception of von Winterfeldt, the king was extremely critical of all the generals who had been with the prince. Their collapse had forced the king to abandon Bohemia and the whole army was demoralized. The magazines at Zittau and Gabel, the towns themselves and the entire supply train had been lost, all due to the timidity of prince August Wilhelm's command.

On July 30, the prince wrote to the king:

'My dear brother, the letter which you have written and the manner of my reception by you yesterday tell me plainly enough that I have lost my honour and my reputation. This troubles me, but does not destroy me, as I do not accept that I have anything to be ashamed of. I think it will be of no use to ask you to subject my conduct to an enquiry, which would be a great favour. My state of health is poor due to the strains and worries of the recent past and I have taken lodgings in the town in order to recover.'

The king replied: 'Your poor conduct has placed me in a terrible situation. It is not the enemy, but your poor orders, which have caused the damage, my generals are not to be excused, as they advised you so badly, or allowed you to influence them to accept your bad decisions. Your ears are used only to listening to the words of flatterers, but Daun did not flatter you. I shall fight and if we cannot win, we shall all die. I do not complain about your heart, but about your incompetence and judgement...'

Shortly after this, the prince left the army and returned to his castle at Oranienburg, where he died on June 12 1758. August Wilhelm was a benevolent and very popular officer, well loved by his younger brothers, Prince Henry and Prince Ferdinand. These laid the blame for his early death at Frederick's door and never forgave him for it. Much of the animosity against the king, which existed in their circle of friends originated from this. Among these were von Behrenhorst, von Gaudi, von Retzow and von Kalkreuth.

This text is essentially a translation and an abridged and adapted version of the following article now in the public domain:

Digby Smith for the translation and initial version of this article