After years of experimentation, the teams of Fürst Joseph Wenzel von Liechtenstein introduced two new howitzer models in 1750 and 1752. The old pattern M1716/1722 12-pounder howitzer continued to be in use all threough the Seven Years' War.

N. B.: in this article we use the Vienna Schuh as the original unit of measure for Austrian artillery pieces. One Vienna Schuh measures 31.61 cm or 12.444 inches. 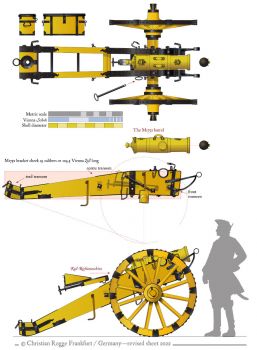 This section presents the original 1752 Regulation 7-pdr howitzer, which replaced the 10-pdr design found in the 1750 Regulation range of ordnance. A draft of this 7-pdr howitzer can be found among the artillery folders of the Stuttgart Nicolai Collection. Our reconstruction is also backed with sources found at the Vienna Liechtenstein House Archive. The basic scale used to find the dimensions of this piece is the diameter of the shot or calibre.

These basic dimensions of the barrel as well as the carriage remained basically unaltered until well beyond the Napoleonic period, as the figures from around 1807 and the late 1820s reveal. However, in later designs, the lower face of the bracket cheek was straight from front to trail, omitting the angle found with the 1752 design.

The wheels had the 1752 Regulation diameter of 51.25 Vienna Zoll as for all field guns.

In the accompanying illustration, we assume that for the M1752 there was only one pair of Avancier–Eisen (iron rings used to insert the Avancier–Stange) instead of the two pairs found in later designs.

N.B.: The design of the iron fittings in the accompanying illustration remains somewhat speculative – to the exception of the largish centre iron strap with its two holes to deploy the iron pin that served to fix the lower wedge of the Keil–Richtmaschine. The design of the metal fittings changed considerably during this period and may not even have been the same during the Seven Years' War when Austrian guns were coming from workshops across half of Europe from the regions of Transylvania to Flanders.

According to the 1752 Nicolai Collection tables, the ammunition chest (the so-called Lavetten–Trügl) carried on the carriage of this 7-pdr howitzer measured 24 by 9 by 12 Vienna Zoll.

According to the 1759 Regulation article 213, the crew of a 7-pdr howitzer consisted of 7 gunners (1 Jung-Feuerwerker NCO and 6 Büchsenmeisters) and 8 Handlanger (handymen)). It was moved by 2-3-horse team in the field, but the number of horses was increased to 4 in 1758. Each piece had 100 shell cartridges, 20 canister rounds and 3 illumination flares. Each Liechtenstein 7-pdr howitzer had one two-horse ammunition wagon (four horses if the piece was to accompany cavalry). 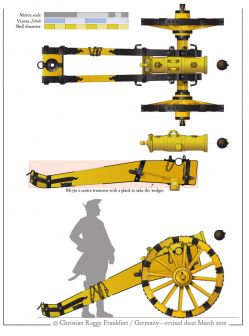 This section presents the 10-pdr design found in the range of ordnance of the 15 April 1750 Regulation. In 1752, this M1750 10-pdr howitzer would be removed from the range of the Liechtenstein system, and replaced by the new 7-pdr howitzer.

The scale drawing of the new 10–pdr Howitzer is based on the figures found in the artillery folders of the Nicolai Collection. With the 1750 Regulation, this piece was not entitled a battery or siege artillery piece. Only later, after the Seven Years' War, it was separated from the 7-pdr ‘field howitzer’ and denominated ‘battery howitzer’.

Prior to the introduction of the Keil-Richtmaschine after 1752, the piece was aimed with ordinary wooden wedges (Austrian: Schusskeile).

The metal strength of the illustrated 1750 construction was 15/32 around the chamber. The latter had a diameter of 14/32. At the centre around the Gewölb the metal strength was 9/32. The chase had a rear metal strength of 6/32 descending to 5/32 at the muzzle. The trunnions had a diameter of 20/32. N.B.: with the July 1752 Regulation, this piece was replaced by the 7-pdr howitzer hence, from that date it was not among the range of the accepted regulation ordnance. None would have been fielded during the first Seven Years' War.

However, as Gribeauval mentions, 7-pdr and 10-pdr howitzers were fielded by the Austrians in 1762, it is believed the 10-pdr howitzer had been reintroduced somewhere after 1759, in imitation of the successful Prussian short 10-pdr recently fielded in greater numbers by the Prussians. This reintroduced 10-pdr howitzer barrel would have been fielded with a new M1752 carriage, not so different from that of the 7-pdr howitzer. Unfortunately, we could not find a draft of the later carriage. Around 1800, the bracket cheek was 1 calibre or approx 0.5 Schuh longer. 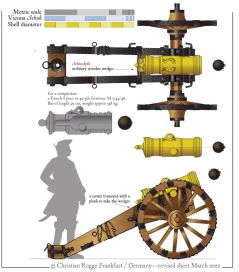 The scale drawing of the 12–pdr howitzer is based on a draft found among the artillery folders of the Nicolai Collection. It can be identified as M1737. The 1737 Regulation Ordnance continued to be essentially based on the earlier Regulation Ordnance of 1716/1722. The main difference being some changes with the moulding, which became less elaborate and neatly sculptured, such as the 24-pdr cannon formally being sculptured as an eagles head. This 12-pdr howitzer construction is a somewhat lighter variant of the 1716/1722 one, with the 12-pdr howitzer being 6 calibres long and weighing approx 1,000 Vienna Pfund or 561 kg, as per the Austro–Hungarian General Staff History of the War of Austrian Succession publ. in 14 vols, 1896—1914.

This lightened construction arrived at a mass of approx 800 Vienna Pfund (450 kg).

The carriage depicted in our illustration is the pre-1750 old pattern carriage furnished with linseed oil rather then painted yellow.

The rather small wheels have a height of 44.5 Vienna Zoll (120 cm). It was one of the four custom wheel dimensions for the M1716/1722 gun carriages in use, according to the k.u.k. Austro–Hungarian General–Staff History on the War of Austrian Succession.

It is unknown if the 12-pdr howitzers fielded during the Seven Years' War had received new carriages.