On October 21, 1740, when Maria Theresa inherited the throne of Austria from her father Charles VI, the Austrian Army was in bad condition after the disastrous war against Turkey from 1736 to 1739. Furthermore, the treasury was empty.

Usually, the new ruler would issue new colours. However, the so-called War of the Austrian Succession (1740–1748) broke out two months after Maria Theresa's accession and she had no time to issue new colours. Therefore, each infantry regiment carried 17 colours (1 Leibfahne and 16 Ordinair-fahnen).

The Leibfahne was identical for all regiments: white field with a centre device depicting the Blessed Virgin. However, borders could differ and matched the borders of the Ordinair-fahnen of each regiment.

Ordinair-fahnen had yellow, green, red or red-white-red fields, bordered with stripes or flames.

The colour was nailed on a pike with 3 or 4 rows of gilt-headed nails. The finials of the pikes were decorated with gilt spear-points engraved or pierced with the double eagle or the imperial cipher, or a patron saint, or the proprietor's crest, or a provincial badge.

At the beginning of the War of the Austrian Succession, in 1741 and 1742, new infantry regiments were raised in the Netherlands and in Hungary. The Hofkriegsrat (Court Council of War) stipulated that these new regiment should carry only 2 colours per battalion; the Leibfahne had to be white and the Ordinair-fahnen red. However, the Hofkriegsrat did not specify the design of each colour.

One of these new Leibfahne had a white field; a centre device consisting of the Madonna and Child within an oval of golden rays and standing on a crescent moon (as the patron saint of Hungary); a red cartouche below bearing the white rampant Bohemian lion, holding the Hungarian cross in its right claw, its left claw placed on the oval Austrian badge, surmounted by a grand duke's crown (the cipher “MT” on the central white bar of this shield). The flag was edged in black-red-black-white flames. The finial represented the Madonna with Child over the Hungarian crest on the one side and, on the other, the lion with the cross and Austrian shield with the date “1741” beneath it.

Colours of the 1743 pattern

During the period between January 24, 1742 Karl, when Theodor of Bavaria became Holy Roman Emperor, and September 13, 1745, when Francis I succeeded him as emperor, Maria Theresa had to remove imperial insignia (including all black and gold colours) from the colours of her infantry. 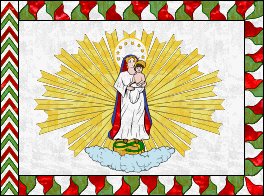 The new Ordinair-fahnen had a grass green field bordered with red-white-green flames; the centre device consisted of Maria Theresa's small crest under an arched crown. The badge bore the crests of new Hungary, Bohemia, old Burgundy and Tyrol with the red-white-red Austrian heart shield topped by an archducal crown. On each side of the centre device stood Maria Theresa's cipher (MT) and Francis' cipher (FC). The pike was painted in green and red spirals with a gilt finial. A short red-green cravat with golden fringes at each end was knotted around the pike. 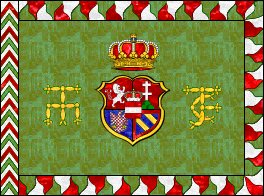 N.B.: Hungarian colours were identical but the colour of the flames were green, white, red, in that order.

However, as long as colours were considered as serviceable, they were not replaced by this new pattern. Furthermore, the new rules concerning the designs of colours were widely ignored.

Colours of the 1745 pattern

On September 13, 1745, Maria Theresa's consort, Franz, was elected emperor of the Holy Roman Empire and all the imperial insignia could be borne on the colours and standards again. The regulation of 1743 was rescinded.

The new Leibfahne was as follows:

The new Ordinair-fahne was as follows:

Only regimental proprietors who were very close to the imperial couple were permitted to deviate from this norm.

The pike was wound around with a black, yellow, red and white silk ribbon in a spiral. The gilt finial was engraved on one side with the Madonna and the Chef's crest, on the other with the double eagle.

By 1756, only a few regiments had actually purchased sets of flags of the 1745 pattern; so, many regiments, who had been issued colours of the 1743 pattern, were still carrying them at the beginning of the Seven Years' War.

In September 1765, Franz Moritz count Lacy introduced a new design for colours which, instead of being made of appliques and embroidery, were painted in oils. However, these new colours replaced the old one gradually since they were issued when old colours were worn out.

Distribution of colours within regiments

Digby Smith for the translation.