The regiment was created on September 3, 1684 as “Béarn Infanterie”, in the Pyrenees region. Indeed, expecting a Coalition to soon form against France, Louis XIV raised 30 new regiments from September 1 to 30 for the defence of the various places of the realm. By raising one regiment a day, he avoided any problem of precedence among these new regiments. The new regiment was formed from the “Garanné Bataillon” of Picardie Infanterie and given to Henri-Charles de Mornay, Marquis de Montchevreuil.

In 1749 the Santerre Regiment was incorporated to the Béarn. The regiment counted two battalions.

During the Seven Years' War, the regiment ranked 72nd and was under the command of:

The regiment was disbanded on November 25, 1762. Its grenadiers and officers were incorporated into the Grenadiers de France while its sergeants, corporals, fusiliers and drummers were offered the opportunity to serve at Saint-Domingue in the colonies by joining the Boulonnais, Foix or Quercy regiments.

The 1st battalion remained in Europe throughout the Seven Years' War and was assigned to the defence of the coasts. By August 1 1757, the regiment was stationed at La Rochelle in Aunis Country.

In 1755, the second battalion (13 companies) formed part of the reinforcement destined to Canada. On May 3, the fleet transporting these reinforcements set sail from Brest. On June 20, the battalion disembarked at Québec. Soon after, it was sent to Fort Frontenac (present-day Kingston) along with a battalion of Guyenne Infanterie. The battalion took up its winter-quarters in Contrecoeur and Laprairie.

In June 1756, the second battalion was sent to defend Fort Niagara on Lake Ontario. In July, part of the battalion was recalled from Niagara to join the expedition against Fort Oswego. It took up its winter-quarters in Contrecoeur and Laprairie.

In May 1757, the second battalion was back to Carillon (present-day Ticonderoga) where it continued work on the fort. By July 20, a French force totaling 8,000 men (including this battalion ) was gathered at Carillon. On August 1, this force left Carillon with the Marquis de Montcalm and advanced towards Fort William Henry. From August 5 to 9, the battalion took part in the Siege of Fort William Henry. After the capture and destruction of the fort, the French force reembarked on August 16 for Carillon. On October 20, the battalion quitted Carillon to take its winter-quarters, leaving a piquet behind to garrison the fort during winter. On October 27, it went to Montréal to garrison the town during winter. On November, the battalion nearly mutinied due to the reduction of rations. For winter-quarters, 7 companies remained in the town of Montréal while 6 companies went to the opper part of the Island of Montréal.

In mid June 1758, the battalion left its quarters and moved towards Carillon. On June 30, it was part of Bourlamaque's detachment which took position at the head of the portage at the outlet of Lake Saint-Sacrement (present-day Lake George). On July 6, as the British expedition against Carillon materialised, it followed the French main force to the left bank of the fall before retreating to Carillon. On July 7, it worked at the entrenchment in front of the fort. On July 8, it took part in the victorious Battle of Carillon where it was deployed on the right wing under the Chevalier de Lévis. Between November 1 and 5, the entire French army gradually quitted Carillon to move to its winter-quarters, leaving detachments from various battalions to guard the fort. The battalion took up its winter-quarters in the lower part of the Island of Montréal.

On May 29 and 30 1759, the Chevalier de Lévis arrived at Québec with all 5 battalions of regulars (La Sarre Infanterie, Royal Roussillon Infanterie, Languedoc Infanterie, Guyenne Infanterie and Béarn Infanterie) along with the Milice du district de Montréal. While awaiting the arrival of the expected British amphibious force, the French army encamped on the right bank of the Saint-Charles River and fortified it to serve as a second line of defence if ever the British managed to land at Beauport. On June 26, the French army moved to its encampment at Beauport. The 5 battalions of regulars, forming a single brigade, held the centre. On July 31, the battalion took part in the victorious Battle of Beauport where, with the grenadiers, it guarded the extreme left near the cataract of the Montmorency River. On September 13, the battalion took part in the disastrous Battle of Québec (aka Battle of the Plains of Abraham) where it was deployed in the centre. After the battle, the regiment followed the French army in its retreat towards Jacques-Cartier. On October 28, the piquets and grenadiers of the battalion retired from Pointe-aux-Trembles (present-day Neuville). In November, the regiment took up its winter-quarters in the lower part of the Island of Montréal.

By March 1760, 52 men of the battalion had been detached to Saint-Jean while 18 were unfit for duties. This left 384 men available for the expedition against Québec. The latter were supplemented by 184 men from the militias of Longue-Pointe, Pointe-aux-Trembles near Montréal (not to be confused with the town of the same name near Québec), Rivière-des-Prairies and Sault-des-Récollets who were integrated into the battalion. From April 21 to 25, transport vessels gradually sailed from Montréal for Québec. Overall the battalions then counted 24 officers, 371 regulars, 221 militia and 33 non-combatants for a total of 646 men. On April 28, the battalion took part in theBattle of Sainte-Foy where it was deployed in Lasarre Brigade on the left wing of the first line. During this battle, the regiment charged at bayonet point. In mid May, after the failure of the siege of Québec, the battalion retired to Jacques-Cartier. On May 24, the battalion left Jacques-Cartier. On September 9, after the capitulation of Montréal, the battalion still counted 306 men and 23 officers. On September 16, as per the terms of the capitulation, the battalion was embarked aboard British transports who reached Québec on October 10 and 11 and then sailed for France where they arrived in December.

After the return of the 2nd battalion to France, the regiment was reorganised by the regulation of February 1, 1760 into only 12 companies of 20 fusiliers and one company of 40 grenadiers.

The following description of the continental uniform has been verified against the manuscript "Troupes du Roi, Infanterie française et étrangère, année 1757, tome I" and Taccoli's book published in 1760. 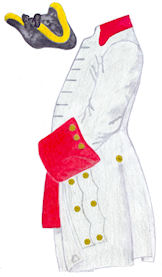 In the general state of the supplies of the six regiments embarked for Canada in 1755, the drummers of the Artois, La Reine, Béarn, Bourgogne, Languedoc and Guyenne regiments were described as wearing the King’s Livery.