born circa 1712, Duchy of Courland 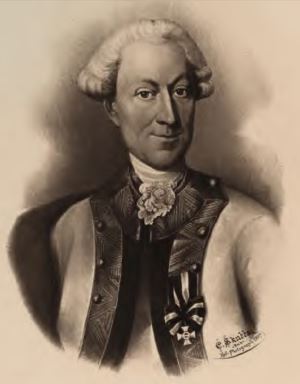 Ferdinand Friedrich was born around 1712 in the Duchy of Courland (today part of Latvia). His family originally came from Mecklenburg in Germany but some other branches of the family lived in various European countries. They served as officers in the armies of Denmark, Prussia, Russia and Austria. Beside the baron branch there was also a branch of Count von Bülow.

Around 1732, at the age of 20, Ferdinand Friedrich obtained an officer post in the Austrian Hildburghausen Infantry.

On August 6 1735, Ferdinand Friedrich was promoted captain in Hildburghausen Infantry.

In 1739, some of Bülow's Austrian biographers mention that he distinguished himself in the Battle of Grocka (July 21–22) against the Turks. However at that time, his regiment was stationed in Genoa in Italy, only his proprietor, General Hildburghausen fought in Serbia as volunteer. It is thus possible that Ferdinand Friedrich had accompanied him for this campaign.

At the end of 1741, during the War of the Austrian Succession, Ferdinand Friedrich's regiment went to Linz and spent the winter in Passau.

In 1744, Hildburghausen Infantry took part in the campaign on the Rhine and in the ensuing retreat to Bohemia when the Prussians invaded this province of the Habsburg Domain.

On April 15 1745, Ferdinand Friedrich distinguished himself once more in the Battle of Pfaffenhofen and was promoted directly to lieutenant-colonel of Hildburghausen Infantry. On October 4, he was present with his regiment at the coronation of Franz Stephan in Frankfurt am Main.

In 1746, Ferdinand Friedrich at the head of one battalion of Hildburghausen Infantry joined the corps of Field-Marshal Maximilian Browne and took part in the campaign of Provence, occupying two of the Lérins Islands (Sainte-Marguerite and Saint-Honorat). The regiment then remained in the vicinities of Genoa until July 1748.

At the end of the War of the Austrian Succession, in 1748, Hildburghausen Infantry was transferred to Styria where it was posted for four years.

On May 12 1751, Ferdinand Friedrich was promoted to second colonel.

In 1752 and 1753, Hildburghausen Infantry garrisoned Písek in Bohemia. During this period, on August 1 1752, Ferdinand Friedrich was promoted to colonel and commander of this regiment.

At the outbreak of the Seven Years' War in 1756, the depot battalion of Hildburghausen Infantry was sent to Olmütz (present-day Olomouc/CZ) while, on October 1, the two field battalions, under the command of Ferdinand Friedrich, took part in the Battle of Lobositz (present-day Lovosice/CZ).

On January 6 1758, Bülow was promoted to General Feldwachtmeister (GFWM). In the Spring, during the Siege of Olmütz (present-day Olomouc/CZ), Bülow was charged by Field-Marshal Daun to introduce reinforcements into the besieged fortress. On June 22, his relief force (1,366 foot, Engineer-Major Stockhausen, 2 officers and 20 artillerymen) successfully entered into Olmütz. The troops has been under the direct command of Lieutenant-Colonel Jacob Robert Nugent–Westmeath, who had already visited Olmütz a few days before as courier. The group was also accompanied by Colonel Schmid (commander of the Fortress of Philippsburg) and Vilard (commander of Semlin). On December 4 1758, Bülow received the Knight Cross of the Maria Theresa Order in the third promotion of this military order.

During the following years, Bülow was attached to Field-Marshal Daun's staff.

In 1761, Bülow was captured by the Prussians. He spent the first month in prison under light surveillance. On October 25, Frederick II gave orders to bring all captured general to the Fortress of Magdeburg.

On April 30 1763, after the Seven Years' War, Bülow was promoted to Feldmarshall Lieutenant (FML), retroactively to March 4 1759.

On February 7 1767, Bülow received the decree making him proprietor of Infantry Regiment No. 45.

Bülow died on June 19 1776 in Bruxelles (according to Wurzbach, he died in his estates). Bülow had never married.