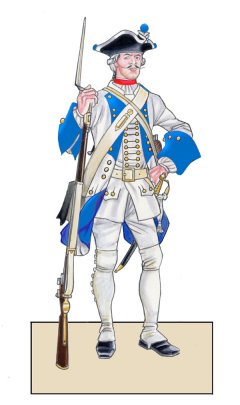 On 3 February 1682, Emperor Leopold I gave orders to FZM Sigmund Count Nigrelli to raise an infantry regiment of 10 companies. The regiment was partially enlisted in the Holy Roman Empire and in the Erblande (Habsburg Hereditary Lands). The commander of the regiment was Colonel-Lieutenant Archinto and its major, N. Syro. The regiment initially garrisoned Rheinsfeld.

From 1683, the regiment took part in the Great Turkish War (1683–1699 ). After the victory against the Turks at Vienna, it was sent to Hungary, arriving at Zips (present-day Spiš in Slovakia) in the Autumn of 1684. It was immediately assigned to the corps under the command of General Schulz. In 1685, the regiment remained in Upper Hungary. In 1686, it participated in the siege of Ofen and took its winter-quarters at Neuhäusel (present-day Nové Zámky/SK). On 12 August 1687, the regiment fought in the battle of Mohács. In 1688, it was at the siege of Belgrade and took its winter-quarters in Serbia. In 1689, the regiment returned to Upper Hungary once more.

The regiment then remained in Upper Hungary until 1697. On 11 September 1697, it took part in the battle of Zenta. After the signature of peace signature was the regiment until 1701 on cordon along Save river.

In 1732, Prince Maximilian von Hessen-Kassel became owner of the regiment which he kept until his death on May 8 1753.

During the War of the Austrian Succession, the regiment served in Bohemia and Silesia in 1741 and 1742. On June 4 1745, it took part in the battle of Hohenfriedberg where it kept its post till the end and covered the retreat of the Austrian army. On September 30 of the same year, it fought at the battle of Soor.

Regimental numbers were introduced only in 1769 when this regiment was designated as "I.R. 27".

At the beginning of September 1756, the regiment, who was previously garrisoning Graz, was sent to the camp of FM Browne's Army near Budin where it was attached to Count Kolowrat's Corps, in the division of Count Starhemberg, in Perroni's Brigade. On October 1, the regiment took part in the Battle of Lobositz where it was deployed in the first line of the centre under General C. Kolowrat. It took its winter-quarters around Budin. During winter, the regiment was brought to a strength of 2,410 men (2 grenadier and 16 fusilier companies).

In April 1757, when the Prussians launched the invasion of Bohemia, the regiment was part of FZM Königsegg's Corps, in the division of Baden-Durlach, in the brigade of Major-General Prince Stolberg. On April 21, the regiment participated in the Combat of Reichenberg. After this defeat, Königsegg retreated to Prague. On May 6, two battalions of the regiment took part in the Battle of Prague where they were deployed in Prince Stolberg's Brigade, in the first line of the right wing of infantry under Count Königsegg on the hills above Štěrboholy. The converged grenadier battalions (22 coys), led by Colonel Guasco, attacked several times, capturing 12 guns and some colours but was finally forced to retreat. The Division Baden-Durlach covered the retreat of the army near Malešice and then went marched to Beneschau (present-day Benešov/CZ). In this battle, the regiment lost Colonel Schukelsky and Colonel Karl Baron von Bülow was appointed commander of the regiment. On November 22, one battalion of the regiment took part in the Battle of Breslau where it was deployed in Sistovictz's brigade, in the second line of the infantry centre under Baron Kheul. It attacked the redoubts at Schmiedefeld. On December 5, at the Battle of Leuthen (present-day Lutynia/PL), the two field battalions (1,300 men) were deployed in Starhemberg's Division in the second line of the infantry right wing under Kheul. In this disastrous battle, the regiment suffered heavy losses: Colonel Baron Bülow, 29 officers and 300 men were taken prisoners; and 600 men were killed or wounded. The third battalion, led by Colonel-Lieutenant Stein distinguished itself during the defence of Breslau against the Prussians. On December 10, the battalion defended the redoubt in front of Breslau, losing Colonel-Lieutenant Stein wounded. After the surrender of Breslau, 8 officers and 100 men were taken prisoners. At the end of December, Baron Stein was promoted to colonel.

In 1758, the regiment remained with FM Daun's main army and participated in the campaign of Moravia. By August 2, one battalion of the regiment was part of the reserve of the main Austrian army under the command of Count Leopold Daun near Jarmeritz. Daun was following up the Prussian army retiring through Bohemia after the failure of the Prussian invasion of Moravia. On 14 October, the regiment took part in the Battle of Hochkirch where it was attached to Baden-Durlach's Corps, in Baron Gemmingen's Brigade.

In 1759, the regiment was attached to the corps of G.d.C. Count O'Donell, in Los Rios' Division while its grenadiers were part of the converged grenadier battalion of Major Count Thurn which formed the avant-garde under Major-General Siskovics. By mid August, the regiment was part of Daun's Army posted in Silesia. On September 2, it took part in the Combat of Sorau. On November 20, 2 battalions of the regiment took part in the Battle of Maxen where they were deployed in the second line of the second column of Sincère's Corps under the command of under Lieutenant-General Dombasle. The regiment took its winter-quarters in Saxony.

In 1760, the third battalion of the regiment garrisoned Dresden. In July, it took part in the defence of Dresden. On November 3, the regiment fought in the Battle of Torgau where, along with Wied Infantry, it attacked the Prussian grenadiers after an intensive artillery fire and drove them back. The Prussians then received support from two fresh brigades and the regiment was forced to retreat on the main army posted on the “Stiptizer Höhen”. In this sanguinary battle, the regiment lost 1 officer killed; Colonel Baron Stein, 10 officers and 200 men wounded. Colonel Baron Stein and 8 wounded officers were captured by the Prussians. The regiment took its winter-quarters around Dresden.

On August 17 1761, a Russian corps effected a junction with Loudon's Corps near Striegau (present-day Strzegom/PL). At the beginning of October, the Russians decided to return to Poland and, on October 1, Loudon successfully stormed Schweidnitz. During the assault, the third battalion of the regiment was in the column of Colonel Count Wallis which attacked the Galgenfort. After the capture of Schweidnitz, this battalion formed part of the garrison of the fortress. The regiment took its winter-quarters in Silesia.

On July 21 1762, the first battalion of the regiment took part in the Battle of Burkersdorf where it defended the entrenchments at Burkersdorf. After the defeat, it followed Daun's Army who retreated behind the mountains to Bohemia. The third battalion took part in the defence of Schweidnitz where it distinguished itself. On the night of August 4, Major Logau made a sortie. On the night of August 18 to 19, he led a second sortie. Finally, on October 9, Schweidnitz surrendered.

In 1763, after the signature of Treaty of Hubertusburg on February 15, the regiment was sent to the Austrian Netherlands where it would remain until 1766.

rank and file were armed with a musket (Model 1745 for fusiliers, Model 1754 for grenadiers). Grenadiers carried a sabre while fusiliers carried only a bayonet.

Muhsfeldt and Schirmer mention that the breeches were blue.

Uniform in 1762 - Source: Frédéric Aubert from a template made by Richard Couture.

rank and file were armed with a musket (Model 1745 for fusiliers, Model 1754 for grenadiers). Grenadiers carried a sabre while fusiliers carried only a bayonet.

As per a regulation of 1755, musicians were now distinguished from rank and file only by azure blue swallow nests edged white on the shoulders. In addition, Donath illustrates the following differences:

All German infantry regiments carried identical colours: a white Leibfahne (colonel) and yellow Regimentsfahne. The hand painted colours were made of silk and, according to some sources, measured 178 cm x 127 cm. However, a flag kept at the Heeresgeschichtliches Museum in Vienna shows different proportions (unfortunately we do not know the exact measurements) which we have used for our illustrations. The 260 cm long flagpoles had golden finial and were decorated with black and yellow spirals of cloth.