The original regiment was raised in 1695 as a regiment of dragoons from 2 companies each from the regiments Taschen and Küchen; increased to 8 companies. In 1695, the regiment saw much good service in Brabant, Flanders and on the Rhine.

In 1715, during the Great Northern War, the regiment served in Pomerania. In 1717, it took part in the capture of Usedom. As a reward for this distinguished service it was converted to a Cuirassier regiment that same year and increased to 5 squadrons.

The regimental cantons were Bartenstein and Heiligenbeil in East Prussia.

Upper Silesia was the inspectorate of the regiment. Its recruitment districts were Ratibor, Rybnik and Sohrau; and its garrison places Hultschin, Katscher, Leobschütz, Ober-Glogau and Ratibor.

By 1806, the regiment was known as the von Bünting Cuirassiers. That year, on October 14, it took part in the Battle of Auerstädt where it was deployed on the left wing. It suffered heavy losses. It surrendered at Pasewalk on October 29 and was not re-raised.

In 1756, the regiment was part of the army of Silesia under field-marshal Schwerin. During this campaign, this army proceeded to a few operations in Eastern Bohemia.

In 1758, the regiment followed the Prussian army in its invasion of Moravia. On June 30, it took part in the Combat of Domstadl, saving the greater part of a large convoy of bullion and ammunition supplies destined for Olmütz. On September 11, it accompanied Frederick II when he marched north on Dresden. On October 10, the regiment took part in the Battle of Hochkirch where it was initially deployed in the second line of the left wing under Seydlitz. It covered the retreat of the defeated Prussian army.

On July 23, 1759, the regiment took part in the Battle of Paltzig where it was attached to Schorlemmer's Division deployed in the first line of the cavalry left wing. On August 12, it fought in the sanguinary Battle of Kunersdorf where it was deployed in the reserve of the right wing as part of Meinicke’s Division, losing 260 troopers and 12 officers.

On November 3 1760, the regiment took part in the Battle of Torgau where it scattered 2 Austrian infantry regiments (Puebla and Wied), and captured a corps of grenadiers and 6 cannon. Over half the regiment were casualties. Each squadron commander was rewarded with the Pour-le-Merite and 500 Thalers.

In 1761, the regiment was at the camp of Bunzelwitz. 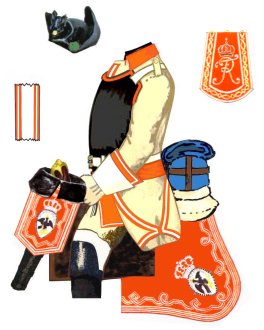 Troopers were armed with a heavy straight-bladed sword, a pair of pistols and a musket. They wore a blackened breastplate edged dark orange and fastened by leather straps. The musket strap was white edged with the regimental lace.

N.B.: golden embroidered buttonholes and a golden aiguillette on the right shoulder decorated the full dress uniform but were not present on the service uniform.

The musician laces consisted of a central buff stripe bordered on each side by alternating dark orange and orange squares.

The square standards were made of damask. The cords and tassels were silver and black. The pole of the standard was a buff tournament lance reinforced with iron hinges and gold finial.

The standard bearers had dark orange standard bandoliers, edged and fringed in gold.