The regiment was raised in 1688 with 4 companies from Kürassier Regiment Nr 5 and 2 companies of new recruits for major-general marquis Franz du Hamel. It initially went into Dutch service.

In 1689, the regiment took part in the siege of Bonn. In 1691, it gave a company to help raise Kürassier Regiment Nr 9 and completed itself with new recruits. Its first garrison was in Kleve. In 1695, it was at the siege of Namur.

Magdeburg was the inspectorate of the regiment and its garrison places were Aschersleben, Gleiwitz, Kroppenstädt and Oschersleben.

On August 26 1756, when the Prussian army proceeded to the invasion of Saxony, the regiment was part of Ferdinand of Brunswick's column which had concentrated at Halle and advanced unopposed through Leipzig, Chemnitz, Freyberg and Dippoldiswalde, to the village of Cotta (reached on September 9) south of the Elbe near Pirna. On October 1, the regiment took part in the battle of Lobositz where it was assigned to the cavalry brigade of major-general Driesen in Katzler's division. On October 23, when Keith's army left Lobositz to return to Pirna country, the regiment joined Frederick II at Linai to cover Keith's advance. On October 28, the whole force reached Gross-Sedlitz near Pirna and the regiment took its winter quarters soon afterwards.

In March 1758, the regiment took part in the invasion of Moravia and, from May 27 to July 2, was at the siege of Olmütz. On October 10, the regiment took part in the battle of Hochkirch where, as part of the Reserve, it was initially deployed en potence between Steindörfel and the Birkenbusch. In this battle, it overthrew Austrian Clerici Infantry, took 500 prisoners and a colour and covered the retreat of the army.

By 1760, the regiment had been re-raised by use of taking 5 companies from Kürassier Regiment Nr 7 and recruiting 5 new. It fought against the Russians in Pomerania.

From August 7 to October 9 1762, the regiment took part in the last siege of Schweidnitz. On October 27, it fought in a combat near Reichenbach. 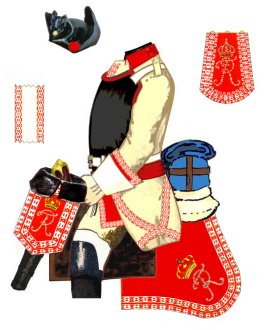