In addition to Cossacks, the Russian Army also fielded Asiatic cavalry from the eastern provinces of the empire. Among these Asiatic units there were approx. 6,000 Bashkirs from Siberia.

The Bashkirs are the indigenous people of modern Russia's Bashkiria Republic and of the western part of the region of Chelyabinsk.

In 1756, the Bashkirs were stationed in Orenburg.

For the campaign of 1757 in East Prussia, 500 Bashkirs were mobilized. They were attached to the 2nd Division of the Russian Army. They did not take part in any serious action.

Before the opening of the campaign of 1758, Fermor sent back his Bashkirs horsemen home. 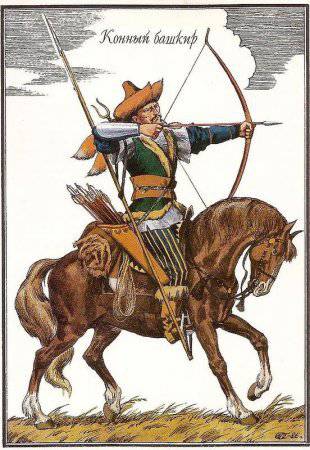 Bashkirs wore their national clothes. Russia supplied cloth for fur hats and kaftans. Each nation received a particular colour: green for the Meskhetian Turks and the Bashkirs.

For hairstyle, most men had completely shaven heads, with small moustaches and beards.

Although some Asiatic horsemen may have been equipped with firearms, even as late as the early 19th Century, they were armed with cold steel weapons, firearms, composite bows and arrows. They were known as effective archers. Each man had two small horses.

There is no mention of standards but some units might have carried a horsetail standard.