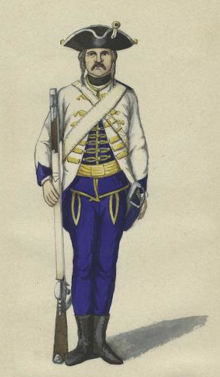 At the end of July 1734, during the War of the Polish Succession (1733-35), the entire regiment was sent to Italy, reaching Mantua at the end of October. It campaigned in Italy until the end of the war and then remained stationed there until October 1741.

In October 1741, during the War of the Austrian Succession (1740-48), the regiment was allocated to Khevenhüller's Army in Austria and fought against Bavarian troops. In 1742, the regiment was sent to Bohemia and arrived on March 26 at Budweis (present-day České Budějovice/CZ). It then took part in the siege of Prague and in the Battles of Chotusitz (May 17 1742). In July 1744, a fourth battalion was enlisted in Transylvania; it then remained in Hungary as a garrison battalion. In 1745, the three field battalions of the regiment fought in the battles of Hohenfriedberg (June 4) and Soor (September 30). In January 1746, the regiment sent back to Italy where it joined FML Bärenklau's Corps. The regiment then took part in the Battle of Piacenza (June 16, 1746) where it lost a total of 157 men.

After the war, in 1749, the regiment garrisoned Cremona. Then in 1753, it was transferred to Monza, Trezzo and Milan. Meanwhile, its fourth battalion was stationed in Pressburg (present-day Bratislava/SK) and Trentschin (present-day Trenčín/SK).

During the Seven Years' War, its successive colonel-commanders were:

Regimental numbers were introduced only in 1769 when this regiment was designated as "I.R. 34".

In June 1756, the regiment was sent from Milan to Cernusco and Como. Meanwhile, its garrison battalion remained at Trentschin and Pressburg. On October 10, the first field battalion and the two grenadier companies set off from Cernusco, under the command of Major Johann von Kiss, and marched towards Bohemia where they arrived in November. The battalion and the grenadiers took up their winter-quarters around Kaurzim (present-day Kouřim/CZ) and Böhmisch Brod (present-day Český Brod/CZ). The regiment then abandoned its administrative organisation in favour of the usual tactical organisation: two field battalions were built from the three former field battalions. Each of the new battalions consisted of 6 fusilier companies à 116 men. Therefore, the regiment now consisted of 2 field battalions and one garrison battalion (the latter counted only 4 companies).

On January 14 1758, the second field battalion (548 men), who had been left in garrison in Italy, marched towards Bohemia to reinforce the main Austrian army. It marched by Linz and Budweis to Prague. From there, it joined the Corps de Reserve of Prince Ahremberg at Böhmisch Skalitz (present-day Česká Skalice/CZ) where it arrived on April 12. The first field battalion and the grenadiers joined the second battalion there and the regiment was reunited after two years. In April, Lieutenant-Colonel Kiss' detachment became prisoners of war after the surrender of the Fortress of Schweidnitz. In June, a detachment of 35 men of the regiment was in FML Bülow's troops sent to the relief of Olmütz besieged by the Prussians. By August 2, the regiment served in the second line of the main Austrian army under the command of Daun near Jarmeritz (present-day Jaroměřice nad Rokytnou). Daun was following up the Prussian army retiring through Bohemia after the failure of the invasion of Moravia. On October 14, the two field battalions of the regiment took part in the Battle of Hochkirch where they were deployed in the second line of the right column of Daun's main army, directly south of Hochkirch. During this battle, Lieutenant-Colonel Kiss was killed during the first attack against the churchyard; Major Ignaz von Rosin immediately assumed command of the first battalion and of the grenadiers and captured the churchyard, taking 18 officers and 300 men prisoners of war and capturing 4 Prussian colours and 4 guns. In addition to Lieutenant-Colonel Kiss, 5 other officers, 11 grenadiers and 41 fusiliers were killed; 11 officers, 29 grenadiers and 148 fusiliers wounded; and 37 fusiliers missing. The regiment took up its winter-quarters around Böhmisch Brod (present-day Český Brod/CZ).

During the campaign of 1759, the regiment saw no action. It was deployed in the corps of FZM Harsch. In September, it formed part of the reinforcements sent, under generals de Ligne and Voglesang, to support FM Loudon. At the end of November, it returned to Silesia to take up its winter-quarters.

On January 23 1760, Ignaz de Rosin von d´Oresil, the colonel-commander of the regiment, was part of the fifth promotion to receive the Maria-Theresia-Order for his conduct at the battle of Hochkirch. According to the order of battle of March 26, the first field battalion and the grenadiers were under the command of Major-General Baron Elrichshausen; while the second battalion was under FML Plunquet. The two field battalions together counted a total of 1,500 men. On May 29, the regiment reached Roth-Kosteletz (present-day Červený Kostelec/CZ) where it effected a junction with Loudon's Corps. Loudon had now 34 battalions, 42 grenadier companies (converged in 8 battalions), 60 squadrons and 44 guns. On May 30, Loudon marched to Silesia which was occupied by a Prussian Corps under G.d.I. Fouqué. On June 23, the two field battalions and the grenadiers of the regiment took part in the Battle of Landeshut where they formed part of the fourth column under Jahnus and Wolfersdorf who attacked Blasdorf. In this battle, the grenadiers lost 7 men killed and 22 wounded. The two field battalions then took part in the Siege of Glatz (present-day Klodsko/PL). On July 26, Major Czecherini and his battalion were the first to enter into the fortress, capturing guns inside. During the siege, the regiment lost 6 men killed and 33 wounded. After the surrender of Glatz, the regiment went with some other troops to Breslau (present-day Wroclaw/PL) and from there with Loudon's Corps to Striegau. On August 15, the two field battalions of the regiment fought in the Battle of Liegnitz where they were deployed in the first line and lost nearly 50 % of its men (54 men killed; 11 officers and 126 men wounded; 10 officers and 740 men taken prisoners of war). Loudon (accompanied by the remnants of the regiment) marched to Cosel (present-day Kozle/PL). After the short and unsuccessful Siege of Cosel, the regiment took up its winter-quarters at Hotzenplotz (present-day Osoblaha/CZ).

For the campaign of 1761, the regiment was once more part of Loudon's Silesian Army, belonging to the corps of Major-General Bethlen. In March, the regiment received 500 new recruits sent from the garrison battalion. In April, an additional 150 recruits arrived. In May, the regiment (now 1.188 men) was attached to Major-General Botta's Corps at Bohrau (present-day Borowa/PL). On October 1, one battalion and the grenadiers of the regiment, led by Major Czecherini, took part in the storming of Schweidnitz where they were attached to the fourth column under Lieutenant-Colonel Baron de Vins who had received orders to capture the Bögenfort (IV.). After the capture of the fort, Czecherini and his battalion immediately penetrated into the town. At 5h30, the regimental colours were planted on the town walls. In this action, the regiment lost 2 officers and 57 fusiliers killed; and 10 officers, 23 grenadiers and 87 fusiliers wounded. Major Czecherini was among the wounded. The regiment took up its winter-quarters to the south of Schweidnitz.

During the winter of 1761-1762, many soldiers fell sick (scurvy and other diseases) due to bad accommodations; the regiment had only some 700 men fit for service. In May, FM Daun concentrated the army around Zobten (present-day Sobotka/PL). The regiment was deployed in the second line under Major-General Amadei and FML Unruh. In July, FM Daun sent 7 infantry regiments (including the present regiment) and one cavalry regiment to Silberberg (present-day Srebrna Gora/PL) to support G.d.C. Hadik. From August to December, a detachment of the regiment (Major Nikolaus Czecherini and 138 men) took part in the defence of Schweidnitz. On October 9, after a siege of 63 days, the fortress surrendered and its garrison along with its commander became prisoners of war. On October 21, for his valour during the siege of Schweidnitz, Major Nikolaus Czecherini Baron de la Vippera was part of the eighth promotion of the Maria-Theresia-Order. The regiment took up its winter-quarters in Silesia: initially in Silberberg and Neudorf; later on Heinrichswalde (present-day Laski/PL).

In 1764, the regiment garrisoned Prague.

The Bautzener Bilderhandschrift of 1762 depicts a veru different coat with yellow collar and cuffs and white lining.

As per the Bautzener Bilderhandschrift, the officers wore a uniform similar to those of privates with the following diffrences:

As per a regulation of 1755, musicians were now distinguished from rank and file only by dark blue swallow nests on the shoulders.

All Hungarian infantry regiments were supposed to carry the same colours as the German infantry regiments: a white Leibfahne (colonel) and yellow Regimentsfahne. The hand painted colours were made of silk and, according to some sources, measured 178 cm x 127 cm. However, a flag kept at the Heeresgeschichtliches Museum in Vienna shows different proportions (unfortunately we do not know the exact measurements) which we have used for our illustrations. The 260 cm long flagpoles had golden finial and were decorated with black and yellow spirals of cloth.

Harald Skala for the translation and integration of Wust's and Kreipner's work into the present article.

User:Zahn for gathering most of the information about the uniform of this regiment