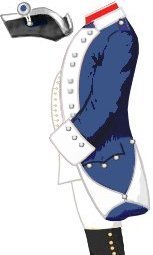 We doubt this model of flags was still in use during the seven years war, ten years after.

If the old imperial type with yellow taffeta was no more carried during the seven years war, we think the old Max Emanuel pattern could have been taken out the arsenal and carried again :