On 13 April 1701, the Marquis de Bedmar, at the request of Maréchal Boufflers, reorganised the tercio to follow the organisation of French dragoon regiments. It kept its old guidon carrying the arms of the Count de Monterey.

In 1702, during the War of the Spanish Succession (1701-14), the tercio initially had its quarters in Namur. It later took part in the occupation of Guelderland and in the engagement near Nijmegen, and was present at the cannonade near Peer. In 1703, it fought in the Battle of Ekeren. In 1704, it was part of reinforcements which did not reached Tallrd's Army in time for the Battle of Blenheim. It then retired to Haguenau and then to the Spanish Netherlands. In 1706, it took part in the Battle of Ramillies; in the engagement of Wijnendale. In 1710, the regiment evacuated the Spanish Netherlands and marched through France to Catalonia where it fought against the insurgents and took part in the siege of Gerona. In 1711, it took part in the capture of Gerona and of the Castle of Arenys, in the unsuccessful siege of Cardona; in 1713, in the blockade of Barcelona; and in 1714, in the siege and capture of Barcelona.

In 1717, 50 dragoons of the regiment took part in the expedition in Sardinia.

According to the regulation of February 10 1718, the regiment was renamed “Belgia” and each of its squadrons received a guidon.

In 1719, the entire regiment joined the army assembling on the French border.

In 1720, the regiment was sent to defend Ceuta on the coasts of North Africa. It returned to Spain in 1721.

According to the regulation of July 12 1728, the guidons of the regiment were made of red silk with the royal arms on their obverse and the Belgian Lion on their reverse with the motto “Ab unque leonis Belgiae regis regaliae.”

On May 16 1729, the privilege of the regiment to have a kettle-drummer, in recognition of its conduct at the Battle of Konzer Brücke, was confirmed.

In 1732, the regiment was once more sent to North Africa for the reconquest of Oran and Mers El Kébir. It returned to Spain in 1734.

In 1735, the regiment joined the “Army of Observation of Extremadura” on the Portuguese border.

In 1741, during the War of the Austrian Succession (1740-48), the regiment marched across France to join the army assembling on the border of the Kingdom of Savoy. In 1742, the regiment took part in the capture of the Castle of Aspremont; in 1743, in the attack of Château Dauphin; in 1744, in the occupation of Nice, in the attack of the lines of Montalban and Villefranche, in the capture of Demont, in the Battle of Madonna dell'Olmo; in 1745, in the Battle of Bassignano; and in 1746, in the battles of Piacenza and Rottofreddo. In 1748, the regiment returned to Spain.

On May 7 1762, the regiment received orders to join the army assembling in Extremadura for the planned invasion of Portugal. Detachments were posted in Villafranca, Acebuchal and Almendralejo. On August 27, a company of the regiment was captured when the Anglo-Portuguese launched a surprise attack on Alcántara. At the end of the campaign, the regiment took up quarters at Jeréz de la Frontera. 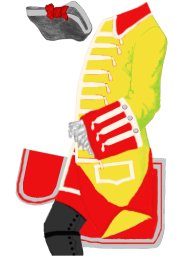 The guidons were made of damask or silk, fringed and embroidered with silver. The cords and tassels were mixed of black and silver.

Obverse: black field, the border embroidered with a vegetal pattern; centre device consisting of the Royal Spanish Arms surrounded by the necklace of the Order of the Golden Fleece; all embroideries of silver.

Reverse: black field, the border emdroidered with a vegetal pattern; centre device consisting of the regimental emblem, a golden lion (the Belgian heraldic animal), surmounted by a silver scroll with an unknown motto; all embroideries (excluding the lion) were made of silver.

Volker Scholz for the information on the guidons.