Commander-in-chief of the Prussian army in Pomerania (1761-62) 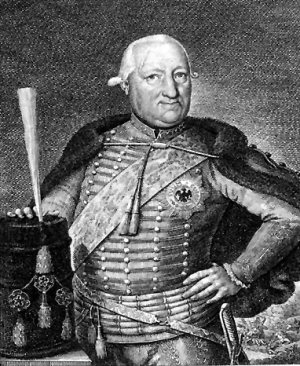 The von Belling family seems to have been known in Pomerania since 1274 during the reign of the Slavic Prince Barnim I. The name Belling is said to be related to the village "Bellin" about 5,7 km east of Ueckermünde by the Baltic. The first renown military of the Belling-family was a Rittmeister (cavalry captain) in 1595 named Christoph von Belling. A Brandenburger Colonel Johann Georg von Belling fell in a fight against the Turks in Buda (Ofen in German) in Hungary. Another famous member of this family was Major-General Johann Georg von Belling who fell in the storming of Bonn in 1689. According to German sources 20 out of 23 Bellings serving in the Prussian Army during the Seven Years' War fell.

Wilhelm von Belling was the son of a Lieutenant-Colonel von Belling. He was born in 1719 at Paulsdorf, his father's estate, in East Prussia.

In 1737, the young von Belling left the cadet school. Because he was not tall enough, he ended up in a garrison battalion in Colberg (present-day Kolobrzeg). But later he got an appointment as cornet by King Frederick Wilhelm I and ended up in a hussar squadron in East Prussia.

In 1741, Belling became first lieutenant in the Zieten Hussars. He was developed as a hussar by the "father" of all Prussian hussars: von Bronikowski.

In August 1759, after the Battle of Kunersdorf, Belling received the Prussian order "Pour le Merite" (popularly known as Blue Max). After this battle Belling fought for a while against the Russians.

From 1760, Belling was heavily engaged against the Swedes, conducting lots of ambushes and small fights during the “Detachment War” or “Pomeranian War”, two names alternatively given to the part of the Seven Years' War which took part in the Pomeranian theatre of operation. His main opponents were then the Swedish Blue "Putbus" Hussars. During a year, Belling fought bravely with 5,000 Prussians against about 15,000 Swedes, suffering heavy losses. His goal was to fix the Swedes in Western Pomerania to prevent their junction with the Russians who were operating in Eastern Pomerania on the other side of the Oder River.

On July 4 1762, von Belling was promoted major-general. Then his 2,250 light cavalrymen became an additional Prussian Corps in Saxony under the supreme command of Prince Henri. On October 29, they also participated in the Battle of Freiberg.

After the Seven Years' War, Belling's three hussar battalions shrunk to two and the regiment changed their black uniform to crimson red and got the German nickname "Die rote Löwen" (The Red Lions). They settled down in the garrison of Stolp (present-day Slupsk) about 113 km east of Colberg in Eastern Pomerania.

In 1776, Belling was promoted lieutenant-general.

In 1778, von Belling got decorated with the "Order of the Black Eagle", receiving an allocation of 1,000 thalers per year and 1,000 thalers as an extra gratification in the first year.

A German made a doctoral dissertation on von Belling in the 1930s stating that, although he was not the best Prussian commander of the Pomeranian War but surely one of the best known and famous of them. From the engagement at Jatzke in September 1761 the tactic of the Prussian hussars was efficiently countered by the Swedish Blue Hussars and the Prussian tactical superiority had come to an end.