This gentleman regiment was raised in 1590 by M. de Lesdiguières. In 1591, the unit took part in the combats of Sparron and Pontcharra against the Savoyards; in 1592, in the siege of Cahours and in the affair of Grésillane; in 1593, in the relief of Exiles; in 1595 in the recapture of Exiles, in the relief of Cahours and in the sieges of Mirabel and Auriol; in 1597, in the combat of Molettes, in the storming of the Fort of Chamousset and in the capture of Charbonnières and of the Castle of Aiguille.

On August 16 1597, under the Marquis de Créqui, it joined the ranks of the French Royal Army.

On 3 April 1600, the regiment was re-established for the war against Savoy. In August it stormed Montmélian. It then took part in the capture of Conflans, Charbonnières, Chambéry and Miolans. In January 1601, the regiment was once more reduced to a single company.

In April 1610, the regiment was re-established and assumed garrison duty in Grenoble till 1616.

In 1622, the regiment was part of the reinforcements sent to the Royal Army in front of Poussin. It also took part in the siege of Montpellier. It then returned to Grenoble to assume garrison duty.

In December 1624, the regiment marched against Genoa. In 1625, it took part in the capture of Capriata, in the siege of Gavi, in the attack on Cairo and in the relief of Verua before returning to Dauphiné.

In 1672, at the beginning of the Franco-Dutch War (1672–78), the regiment was at the passage of the Rhine and took part in the siege of Nijmegen before taking its winter-quarters in Utrecht. In 1673, the regiment campaigned in Holland. In 1674, it was transferred to Roussillon where it fought in the combat of Morillas. In 1675, it took part in the siege of Bellegarde; in 1676, in a brief offensive in Catalonia and in a combat near Espouilles; in 1678, in the capture of Puycerda.

In 1681, the regiment was sent to occupy Casale ceded to France by the Duke of Mantua. It was then sent to Strasbourg where it took part in the construction of the citadel.

After the war, the regiment went to Nîmes and then successively garrisoned Auch, Moulins, Dôle and Vienne.

After the War of the Spanish Succession, the regiment assumed garrison duty in Besançon and incorporated troops from various disbanded regiments.

The regiment was among the French infantry units designated as "Petits Vieux" because they pretended to trace back their origins to the old bands of the XVIth century. At the time of the Seven Years' War, it was considered as one of the best regiments of the French infantry.

When the army was reorganised in 1762, the regiment took the name of the province of Flandre. However, the Comte de Rougé retained his command till 1767.

During the Seven Years' War, the regiment ranked 10th and was commanded by:

In 1756, the regiment was at the camp of Dunkerque and took its winter-quarters at Metz.

In March 1757, the regiment left Metz for Westphalia. On April 3, it joined the Army of the Lower Rhine at Neuss for the planned invasion of Hanover. On April 8, two of its battalions were among the troops who entered into Wesel. On April 10, the two remaining battalions joined them in this town. The army continued its advance and the entire regiment entered into Lippstadt on April 25. It was then cantoned in this town and took part in the works to fortify the place. In May, when the Duke of Cumberland advanced on Lippstadt to immediately retreat, the 4 grenadier companies of the regiment with 300 men of the Volontaires Royaux, pursued him and captured Rittberg where the duke had left a force of 1,200 men to cover his retreat. From April 27 to June 17, the regiment was part of the Reserve under the Prince de Soubise. On July 26, the regiment was at the Battle of Hastenbeck where it was part of the right wing under d'Armentières. He then accompanied the Maréchal de Richelieu in his conquest of Hanover. After the Convention of Kloster-Zeven on September 8, it followed the main body, led by Richelieu, who encamped at Halberstadt in Prussian territory from September 28 to November 5. In this camp, the regiment was placed in the centre of the second line. At the end of the year, it took its winter-quarters in the first line of the French army in Wolfenbüttel.

On January 10 and 11 1758, the regiment took part in several small actions: the surprise attack on Halbertstadt, the relief of the Castle of Reggenstein and the capture of Quedlimburg. In February, when Ferdinand of Brunswick launched his winter offensive in Western Germany, the regiment retired on the Rhine with the rest of the French army. From March 30 to April 4, it was in the second line of Clermont's Army in the camp of Wesel on the Lower Rhine. In April, when Clermont redeployed his army along the Rhine, the regiment was stationed at Cologne. After the successful crossing of the Rhine by Ferdinand's Army on May 31, the regiment retired towards Rheinberg where it joined Clermont's Army on June 2. It remained in this camp until June 12 and was placed in the centre of the first line. On June 23, the regiment took part in the Battle of Krefeld where it was placed in the centre of the first line under Guerchy. In Mid August, after Ferdinand's retreat to the east bank of the Rhine, the regiment, as part of the Army of the Lower Rhine under Contades, recrossed the Rhine to follow the Allied army. On August 20, it was encamped near Wesel where it was placed in the centre of the first line. On September 24, the regiment along with a brigade of cuirassiers was detached from the main French army towards Hamm. At the beginning of October, the regiment was attached to Chevert's Corps which was sent to reinforce Soubise's Army in Hesse. On October 10, it was at the Battle of Lutterberg where it was part of Chevert's Corps which won the day by turning the Allied left flank. The regiment then returned to Westphalia and took its winter-quarters in Düsseldorf.

On April 11 1759, the regiment was part of a corps of 14 bns and 4 sqns detached from the army of the Marquis d'Armentières under the command of the Comte de Saint-Germain to reinforce the Duc de Broglie who was threatened by the advance of an Allied army. Saint-Germain marched towards the Lahn River and arrived at Königstein on the evening of April 13, too late to take part in the Battle of Bergen. On April 14, he made a junction with Broglie's Army. In June, during the French offensive in Western Germany, the regiment was part of the main army under the command of the Marquis de Contades where it was deployed in the first line, on the right wing of the infantry centre. On July 13, the regiment was part of a corps, under M. de Beaupréau, sent forward by Contades to Eidinghausen near Gohfeld to support Broglie at Minden. On July 14, this corps passed the Weser and marched to the French camp near Minden where it replaced Broglie's reserve. On August 1, the regiment took part in the Battle of Minden where it was deployed in the first line of the infantry right wing under the command of the Chevalier de Nicolaï. On August 10, during the Allied counter-offensive in Western Germany, Contades being closely followed in his retreat by Allied detachments, he formed 2 rearguard detachments near Dransfeld. The regiment was attached to the rightmost of these detachments, under the command of M. de Planta. The Allies first moved against the rightmost detachment but the regiment along with Picardie Infanterie formed in battle at the head of the defile and put a stop to the Allied advance. On September 20, the regiment formed part of a force who took position on the heights of Wetzlar to prevent the Allies from passing the Lahn.

By February 9, 1761, the regiment formed part of Rooth’s Corps posted in the neighbourhood of Kassel. On February 14, when the French advanced, the regiment was left in Kassel as part of the garrison of the place. By April 15, the regiment was attached to Gantès’ Corps stationed at Friedberg. On July 16, the regiment took part in the Battle of Vellinghausen, where 3 of its 4 battalions were captured along with 9 colours and 4 regimental guns. Prisoners were later freed and joined the last battalion.

In 1762, the regiment was back in France, where it garrisoned Dunkerque. 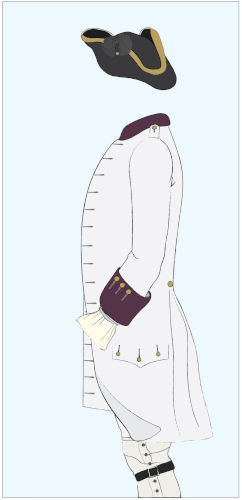 In 1761, the officers wore the same waistcoat as the soldiers.