This German regiment was raised on February 2, 1668 by Guillaume Egon, Landgrave of Fürstemberg. In 1670, this regiment came to France where, on March 27, it was incorporated in the army as a foreign regiment. It consisted of twelve companies under the command of Comte Ferdinand de Fürstemberg, the landgrave’s brother.

In 1670, the regiment campaigned in Lorraine where it contributed to the capture of Épinal.

In 1680, the regiment was reduced to 14 companies. In 1684, it was sent back to Catalonia where it took part in the crossing of the Ter and in the storming of Girona.

In 1720, the regiment became the property of Maurice, Comte de Saxe (the future maréchal) who, with the introduction of training, transformed the regiment into a model unit. In 1727, the regiment made demonstrations at the training camp of the Sambre. In 1732, it did the same at the camp of the Moselle.

In 1733, at the outbreak of the War of the Polish Succession (1733-350, the regiment served on the Rhine where it took part in the siege of Kehl. In 1734, it was at the capture of Trier and Trarbach and at the blockade of Koblenz; took part in the attack on the Lines of Ettlingen and in the siege of Philisbourg. In 1735, it fought in the Combat of Klausen.

On January 8, 1737, the regiment was reduced to a single battalion.

On the eve of the Seven Years' War,, the regiment counted two battalions.

During the Seven Years' War, the regiment ranked 46th and was under the command of:

In October 1756, “Bentheim Infanterie” was selected to form part of the auxiliary corps that Louis XV planned to send to the assistance of Austria. But the project did not materialize.

In 1757, the regiment joined the Army of the Lower Rhine, commanded by the Maréchal d'Estrées, for the planned invasion of Hanover. Early in June, it was in the area of Taklemburg. It finally took its winter-quarters in the first line in the area of Bremen.

At the end of January 1758, the regiment was assigned to the army that Louis XV planned to send to Bohemia for joint operations with the Austrian Army. However in February, when Ferdinand of Brunswick launched his winter offensive in West Germany, the regiment retired on the Rhine with the rest of the French army. From March 30 to April 4, it was in the second line of Clermont's Army in the camp of Wesel on the Lower Rhine. By July, it had been transferred to the Army of the Prince de Soubise assembling near Friedberg in Hesse. In the morning of September 27, the regiment entered into Kassel to prevent its capture by an Allied army under the command of Oberg. 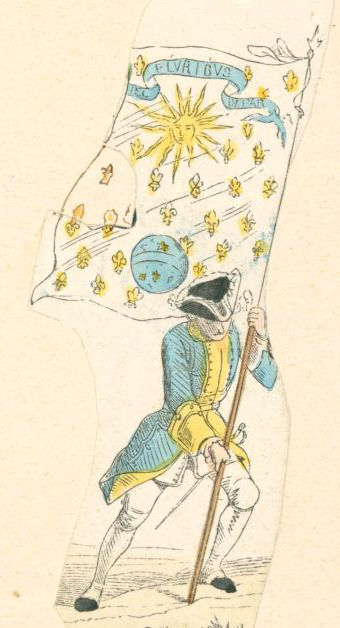 On Tuesday January 2, 1759, at about 5:00 AM, Nassau Prince Louis Infanterie presented itself before the Sachsenhausen Gate of Frankfurt and was admitted as previously agreed. As soon as it had entered the town, the regiment ordered the town-guard to deposit arms and to admit 5 other regiments (Beauvoisis (2 bns), Rohan Montbazon (2 bns), Rohan Rochefort (2 bns), Bentheim (2 bns) and Royal Deux-Ponts (4 bns)). These regiments then seized the artillery on the walls and all the other gates, easily capturing the city of Frankfurt. This very important town remained under French control for the last four years of the war. On April 13, the regiment took part in the Battle of Bergen where it formed part of reserve of the left wing deployed in regimental columns behind the Warthberg. Captain de Nardin was killed during this battle. In June, during the French offensive in Western Germany, the regiment was part of the main army under the command of the Marquis de Contades where it was deployed in the second line, on the right wing of the infantry centre. On August 1, the regiment took part in the Battle of Minden where it was deployed in the second line of the infantry right wing under the command of the Comte de Saint-Germain. As part of the Anhalt Brigade, it covered the retreat of the defeated French army but was driven back by Prussian dragoons. On August 8, the regiment distinguished itself at the combat of Einbeck while covering the retreat of the main army. In this affair, the regiment lost the colonel-commandant de Courvoisier, the aide-major Freytag, Captains Vanaltz and Culmann and four lieutenants, all wounded.

On January 18, 1760, the regiment was increased to three battalions by the incorporation of the first battalion of the disbanded Lowendahl Infanterie. By the end of January, the regiment had taken its winter-quarters in the first line of the French Army. By mid March, the regiment was billeted in Nauheim (present-day Bad Nauheim), in the first line of the French Army. By May 23, the regiment was part of the right reserve of the first line of Broglie's Army, placed under the command of Prince Xavier. In the night of July 7 to 8, Glaubitz left with Anhalt Brigade and Bercheny Hussards for Amöneburg to cover Marburg and the convoys coming from Giessen. On July 14, Glaubitz's detachment (Anhalt Infanterie (3 bns), Royal Bavière Infanterie (3 bns), Bercheny Hussards and some light troops) marched from Marburg towards Ziegenhain, encamping at Vasbeck for the night. On July 16, it was attacked by surprise by the Hereditary Prince of Brunswick in the Engagement of Emsdorf where the regiment occupied the centre of Glaubitz's positions. The regiment was forced to surrender as prisoners of war. By December 30, the regiment had taken its winter-quarters in Ziegenhain.

During the campaigns of 1761 and 1762, the regiment assumed garrison duties. 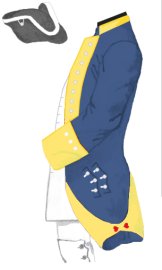 The colonel flag was white with a golden sun in its centre surmounted by a red scroll bearing the motto “Nec Pluribus Impar” and with a blue imperial globe and a golden cross beneath. The white field was semée with golden fleurs de lys.

The ordonnance flags had a white field with a blue frame in its centre. This frame contained three golden fleurs de lys surrounded by a laurel wreath and surmounted by a red and gold crown. The white field was decorated with 6 blue transversal bands originating from each corner. These bands changed to black in 1759 when the regiment changed its name to Anhalt.