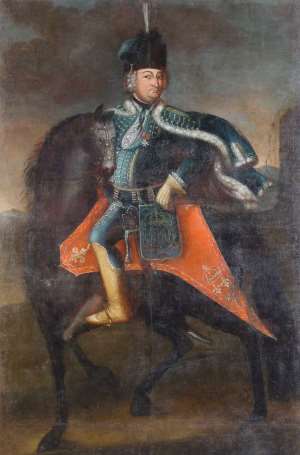 Ladislaus Bercsényi came from an old noble family of Upper-Hungary. He was born on August 3 1689 in Eperjes (present-day Prešov in Slovakia).

The family owned a palace on the market place of Prešov (it was on the place on which the Kolbušicky Palace stands today).

The mother died when Ladislaus was two years old, so for a few years, he was educated by the second wife of Count Nikolaus, Countess Christina Csáky.

In 1703, when the uprising of Franz II Rákóczi broke out, Nikolaus Count Bercsényi, a familiar of Prince Rákóczi, became commander of the rebel army.

On August 3 1708, in the Battle of Trencsén (present-day Trenčín), he saved the prince's life whose horse had been shot under him. As his horse fell, the prince got trapped under its body and passed out. Ladislaus freed the unconscious man and brought him back to safety. For this act, he was appointed flag bearer and shortly thereafter became a major in the Guard.

In 1711, when the Imperial forces crushed the rebellion, Ladislaus had to leave his country. To allow him a new chance, Prince Rákoczi sent him to France as his messenger with personal letters for Louis XIV.

On September 1 1712, Louis XIV appointed Bercsényi lieutenant in his Mousquetaires de la Garde. Soon afterwards, Ladislaus was promoted to captain. On December 31 of the same year, Bercsényi was transferred to the, by then, sole hussar regiment of the French Army: Rátky Hussars (aka Rátsky or Ráttky) as supernumerary lieutenant-colonel.

In 1713, with this regiment, Bercsényi took part in combats against the Imperials on the Rhine.

On December 1 1718, Bercsényi was promoted colonel (mestre de camp) retroactively to August 1 of the same year.

During the War of the Quadruple Alliance, in 1719, Bercsényi took part in a campaign in Spain. He was at the capture of the Fortress of Fontarabie who capitulated on July 16. He then participated in the siege of the Fortress of San Sebastian who fell on August 1; and fought in the engagements near Urgel and Roses. In these combats, he repeatedly demonstrated his courage.

In May 1720 in Marseille, Bercsényi received the Knight's Cross of the Ordre de Saint-Louis. On June 12, Ladislaus Comte Bercsényi received a letter patent authorising him to raise a hussar regiment who would bear his name. The troops of Bercheny Hussards should consist exclusively of Hungarians. For obvious reasons, Bercsényi could not recruit directly in Hungary. Hence, he travelled to Transsylvania, Wallachia and Moldavia then occupied by the Turks as well as in Turkey proper where, after the suppression of Rákoczi uprising, many rebels had taken refuge. However, he was unable to raise enough recruits and had to ask for approval to raise troops in German principalities.

As the various états of the French hussar regiments clearly indicate, between 1723 and 1728, a growing number of hussars were recruited in Alsace and Lorraine.

On June 1 1725, Bercsényi was appointed Supreme Treasurer of the Polish King Stanislaus Lesczinsky who had taken refuge in Weissenburg with his court and placed himself under the protection of the King of France.

At the outbreak of the War of the Polish Succession, in 1733, Bercsényi took the field with his hussar regiment. He was at the siege of Kehl who was captured by the French on October 28. Then, on February 20 1734, Bercsényi was promoted general (Brigadier des armées du Roi) and simultaneously assigned to the Army of the Rhine under Maréchal Berwick. The same year, Bercsényi took part in the sieges of Philippsburg and Mainz. In 1735, he remained with the Army of the Rhine who was now under the command of Maréchal de Coigny.

After the war, on March 1 1738, Bercsényi was promoted Maréchal de camp. However, he remained in the circle of King Stanislaus Lesczynski who, on April 21 of the same year, appointed him Colonel of the Royal Equerry.

After the outbreak of the War of the Austrian Succession, in 1741, Bercsényi was attached to the French army who invaded Bohemia. For a short period, he served under the command of Maréchal Ségur in Bavaria and then, from November 26, took part in the occuparion of Prague. In the following months, Bercsényi commanded the troops who fought in Bohemia and then had to retreat to Prague.

In May 1742, Bercsényi took part in the combat of Písek and was at the relief of Frauenberg (present-day Hluboká). He then returned to Prague and took part in the defense of the city. On August 22, he commanded a brigade during a sortie. He managed to take prisoners the captain of a pioneer unit and 150 men of his detachment. In December, Bercsényi took part, under Belle-Isle, in the retreat of the French garrison from Prague to Eger (present-day Cheb). He surmounted the hardships of winter and led his division to Speyer.

On March 16 1743, for his services during the retreat from Bohemia, Bercsényi received the Commander's Cross of the Ordre de Saint-Louis. In April 1743, he was attached to the army of the Maréchal de Noailles who marched to the Main River by Worms, Oppenheim and Aschaffenburg. On June 27, this army took part in the Battle of Dettingen against the Pragmatic Army led by King George II where the French were defeated. Bercsényi then covered the retreat towards the Rhine with his unit. He finally took his winter-quarters in Sarreguemines. On December 8, he was appointed Inspecteur-général of all French hussar regiments.

In 1744, Bercsényi took part in the campaign in Flanders, initially under the command of the Maréchal de Noailles. However, when King Louis XV personally assumed command of the French army, Bercsényi was promoted lieutenant-general. He then fought in engagements at Suffelsheim and Bischwiller. At the end of the year, he served under the Maréchal de Mallebois on the Lower Rhine. Winter brought Bercsényi back to Sarreguemines.

In the campaign of 1745, Bercsényi commanded, from April, a covering force in the army of Prince de Conti on Main River. During winter he was appointed commander of Sarreguemines.

In May 1746, Bercsényi was transferred to Flanders where he assumed command of a large camp near Bruxelles where 32 dragoon regiments and 18 hussar regiments were concentrated. During the siege of the fortresses of Antwerp, Mons and Charleroi, Bercsényi was in the Cavalry Reserve Corps of the Comte de Clermont. On August 14, he was appointed commander of this corps and advamced on the Mehaigne River under the Maréchal de Saxe. Soon afterwards, his corps joined the army of the Maréchal de Conti. On August 20 Bercsényi gave up his corps to the Comte d'Estrées and advanced on the monastery of Heylissen at the head of three hussar regiments and two grenadier battalions, drove the Imperial garrison out of the place and pursued it along the Meuse. On October 11, at the Battle of Rocoux, Bercsényi commanded an entire cavalry division. On November 1, he returned to Sarreguemines where he took his winter-quarters. The same year, he built a small castle in his estates of Luzancy (to the east of Paris).

For the campaign of 1747, Bercsényi assumed once more the command of a corps of 32 squadrons with which, on July 2, he fought in the Battle of Lauffeld, leading a successful attack against the British. During the following winter, Bercsényi was appointed military governor of the Province of Lorraine.

By a decree issued at Lunéville on March 11 1748, Bercsényi was appointed Governor of Commercy and Master of hunters at the court of Stanislaus Lesczynski and, the same year Governor of Commercy. In June, Bercsényi was instructed to join the army of the Maréchal Belle-Isle, operating in Italy. However, he did not take part in any combat and on October 23 returned to Commercy.

On August 25 1753, Bercsényi received the Great Cross of the Ordre de Saint-Louis, in recognition for his many years of service.

Soon after the beginning of the Seven Years' War, in 1757, Bercsényi was initially attached to the corps that Louis XV intended to send to Maria Theresa as reinforcement. Bercsényi commanded the units of the first line and fought mainly in Hessen. In November, he returned to France.

On March 15 1758 at Versailles, Bercsényi was promoted Maréchal de France. From then on, he did not take part in campaigns. 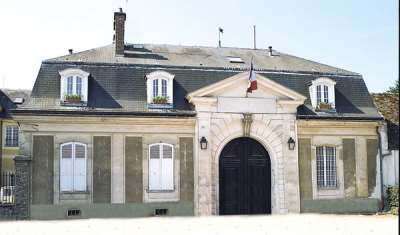 Castle of Luzancy - Source: Photo by Alain Petiot in the collection of Harald Skala

On November 26 1759, Bercsényi resigned from his function of Inspecteur Général of the hussar regiments. At an age of more than 70, he finally returned to private life. From then on, he lived in his estates of Luzancy (to the east of Paris).

Ladislaus Count Bercsényi died on January 9 1778 in his Castle of Luzancy at the age of 88 and was buried in the crypt of the church of Luzancy.

He had married Anna Katharina, born de Wiett-Gérard (*1702 +1766, also known as Dewiet or de Wiet) a patrician family of Haguenau in Alsace. Twelve children were born from this morganatic marriage. His son Franz Anton Ladislaus, born in Lunéville on June 17 1744, also served in the French Army and reached, as his father, the rank of maréchal de camp.