The regiment was raised on August 12 1744 in the country of Juliers (present-day Jülich).

During the War of the Austrian Succession, the regiment served in Flanders from 1744 to 1748.

During the Seven Years' War, the regiment ranked 108th and was under the command of:

On January 18 1760, when the German Infantry was reorganised, the regiment was disbanded and his unique battalion incorporated into Alsace Infanterie.

By August 1 1757, the regiment was in Germany with the army of the Weser. It took its winter quarters in the first line in the area of Bremen.

In February 1758, when Ferdinand of Brunswick launched his offensive in West Germany, the regiment retired on the Rhine with the rest of the French army. From March 30 to April 4, it was in the first line of Clermont's army in the camp of Wesel on the Lower Rhine. By July, it had joined the army of the Prince de Soubise assembling near Friedberg in Hesse. 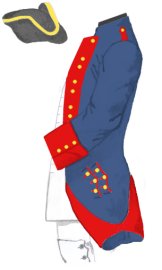 The ordonnance flags had a white field and a white cross. The inner borders sides of each canton were bordered by red and blue waved lines. Each canton carried a golden fleur de lys. In the middle: a white eagle with a white scroll underneath bearing the motto “Fortes creantur fortibus” and 3 white eaglets underneath.