On May 3 1757, M. Dubois de la Motte escaped from Brest with reinforcement for Louisbourg: 9 ships of the line, 4 frigates, and the 2nd and 3rd battalions of this regiment. In August, judging his force strong enough, La Motte sent these 2 battalions to Québec aboard the Bizarre (64) and Célèbre (64). The two battalions of the regiment suffered badly from an epidemic during transit. Bouganville Journal, September 20, 1757:

"The Marquis de Montcalm reviewed the Berry Regiment, the two battalions must have lost two hundred men by the epidemic which still continues. In the last twenty days there have died four nuns, four chaplains, and generally fourteen or fifteen people a day. On the nineteenth, twenty-two died. It is some sort of plagues contracted on board the ships. I see the same thing happen each year and I am astonished that they do not seek remedy for this evil. Ventilation put in the ships would at least diminish the cause." 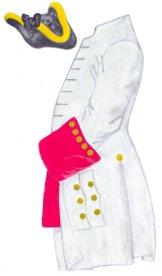