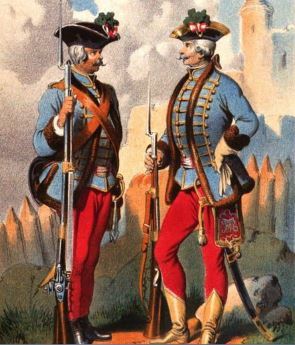 The regiment was raised during the War of the Austrian Succession in the north-west of Hungary and in the mining region (Bergstädte in Middle Slovakia) by Farkas (Wolfgang) Count Bethlen, formerly major of Vettes Infantry. The relevant decree was issued by Maria Theresa, Queen of Bohemia and Hungary on October 27 1741. Josef Count Nádasdy was appointed lieutenant-colonel; and Gabriel Baron Balassa, major. The regiment should have 3,000 men (in 4 battalions, each of 5 companies), 50 men were transferred as cadre from Vettes Infantry. The regiment had at that time no proprietor, the obligations of the proprietor were directly assumed by the Hofkriegsrat (Imperial War Council). In March 1742, the two first battalions were reviewed in Ungarisch-Hradisch (present-day Uherské Hradiště/CZ). The other two battalions were reviewed at Skalic (present-day Skalice/CZ), Jablunka (present-day Jablunka/CZ) and Teschen (present-day Těšín/CZ). One battalion was sent to the siege of Prague, another to Olmütz. In September, the third battalion was sent from Ungarisch Hradisch to Bavaria and from there immediately to Bohemia where it participated in the siege of Eger (present-day Cheb/CZ).

At the beginning of 1743, the regiment was deployed as follows: 2 battalions at Eger, 1 battalion at Olmütz and 1 battalion at Ungarisch Hradisch and Teschen. In May 1743, the fourth battalion supported the siege troops of General Festetics at Prague. After the surrender of Eger, two battalions escorted French prisoners of war to Wiener Neustadt where they remained until the end of the year. The third battalion was in Olmütz and the fourth in Ungarisch Hradisch, Trencsin (present-day Trenčín/SK). and Leopoldstadt (present-day Leopoldov/SK).

In 1744, the regiment was assembled and allocated to the corps of G.d.C Count Batthyányi operating in Bavaria. After Prussian troops had penetrated into Bohemia, Count Batthyányi was sent to Prague with part of his corps (incl. 2 bns of Bethlen Infantry). After occupation of Prague by the Prussians, his corps retired to Southern Bohemia. In October, the four battalions of the regiment were reunited once more. In November, they took up their winter-quarters near Passau, Schärding and Braunau.

In 1745, two bns served in Batthyányi's Corps in Bavaria while two remained in their garrisons. At the end of September, the two bns who had been left in garrison were allocated to the Army of the Prince de Lorraine in Saxony, being attached to Count Grünne's Corps. At the end of October, the two bns previously serving in Bavaria joined Lorraine's Army in Saxony. On December 15, the regiment took part in the Battle of Kesselsdorf. After this battle, the regiment took up its winter quarters near Tachau (present-day Tachov/CZ).

The same year (1745), on the occasion of the coronation of Francis I on September 12, Colonel Bethlen was promoted to major-general on October 15 and Josef Count Nádasdy was promoted to colonel and commander of the regiment on December 31.

After the signature of the Treaty of Dresden (December 25, 1745) Grünne's Corps was reorganised and sent to the Austrian Netherlands. At the beginning of April 1746, three bns of the regiment arrived at Roermond, the fourth bn was sent to Stuhlweissenburg (present-day Székesfehérvár/HU). The three field bns (1,670 men in total) participated in the defence of Antwerp.

On January 16 1747, Major-General Count Bethlen was officially appointed proprietor of the regiment (until that day the Hofkriegsrat exercised this function). In April, two grenadier companies were established. The regiment remained in the Austrian Netherlands until the end of the war.

On October 3 1748, the regiment marched to its peace garrison Prague and, in 1749 to Kolin. From 1752, three bns were posted at Görz (present-day Gorica/HR) and Gradiska, the fourth bn, led by Lieutenant-Colonel Josef Baron Formentini, garrisoned at Peterwardein (Petrovaradin, present-day part of Novi Sad/Serbia).

During the Seven Years' War, its colonel-commander was:

Regimental numbers were introduced only in 1769 when this regiment was designated as "I.R. 52". 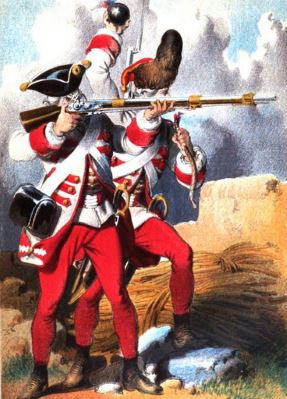 On August 7 1756, the two field battalions and the two grenadier companies (a total of 1,354 men) marched from their garrisons to join the army assembling at the camp at Brünn (present-day Brno/CZ) and then effected a junction with Piccolomini's covering force in the Königshof-Kolin region. Until end of the year, the regiment was not engaged in any action and took up its winter-quarter around Brüx (present-day Most/CZ) and Laun (present-day Louny/CZ).

On May 6 1757, one of the field battalion was part of the garrison of Prague while the other and the grenadiers took part in the Battle of Prague where it was deployed in baron Wulfen's Brigade, in the second line of the left wing of infantry under Baron Kheul. In this battle, the battalion lost 2 officers and 23 men killed; 3 officers and 70 men wounded; and 3 officers and 212 men taken prisoners of war. After the battle, the field battalions and the grenadiers were reunited in Prague, they still totalled 28 officers and 1,010 men. After the victory at Kolin, the regiment, as part of Daun's Army, followed the retiring Prussian army to Upper Lusatia. One detachment of 180 men participated in the Siege of Schweidnitz and remained there as garrison after the surrender of the fortress. On November 22, two battalions of the regiment took part in the Battle of Breslau where they were deployed in Würben's Brigade, in the second line of the infantry centre under Baron Kheul. During the battle, Colonel Reinhard and Lieutenant-Colonel Antonyis distinguished themselves at the head of their respective battalion. The regiment lost 3 officers and 24 men killed; 10 officers and 202 men wounded; 12 men missing; and had now only 745 men fit for service. On December 5 at the Battle of Leuthen, one battalion of the regiment was deployed in Haller's Brigade in the second line of the infantry left wing under Colloredo. In this battle, the regiment lost another 327 men. On December 22, in the camp of Liebau (present-day Libava/PL) the regiment counted only 81 grenadiers and 231 fusiliers which were combined with the remnants of Haller Infantry to form a temporary regiment. The winter-quarters were around Königgrätz (present-day Hradec Králové/CZ).

By August 2 1758, one battalion of the regiment served in the first line of the main Austrian army under the command of Daun near Jarmeritz (actual Jaroměřice nad Rokytnou). Daun was following up the Prussian army retiring through Bohemia after the failure of the Prussian invasion of Moravia. On October 14, the regiment was present at the Battle of Hochkirch but saw no action. At the beginning of November, it was allocated to the Army of Saxony and took up its winter-quarter in Bohemia near Levin/CZ.

On March 1 1759, one battalion and the grenadiers set off from Levin to join the corps of FML Beck at Böhmisch Aicha (present-day Český Dub/CZ). On March 26, this corps surprised the Prussian garrison at Greifenberg (present day Gryfov Slaski/PL). On August 12, the regiment fought in the Battle of Kunersdorf where it was deployed in the reserve of the centre as part of Loudon's infantry corps. In this sanguinary battle, the regiment lost 32 grenadiers and 8 fusiliers killed; 5 officers and 87 men wounded; and 32 men missing. After the battle, Loudon marched through Poland to Bohemia. The soldiers suffered from the very bad weather conditions. At beginning of December, the regiment took some rest at Krakau. The wounded and ill soldiers of the corps were transported through Tarnow to Käsmark (present-day Kežmarok/SK), 2 officers and 81 men from the regiment went to the hospital at Kaschau (present-day Košice/SK).

At the beginning of January 1760, only a few men finally reached Bohemia and were quartered at Komotau (present-day Chomutov/CZ). In March, the regiment received orders to march to Dresden where it was attached to Lacy' Corps which followed the Prussians when they lifted the siege of Dresden and retired. This corps was not engaged in the Battle of Liegnitz (August 15). In October, this corps was sent to support the Russians during they advance on Berlin. A detachment of the regiment, along with Kaiser Franz I Hussars and 2 pulks of Uhlans led by Major-General Count Esterházy occupied Potsdam and destroyed the firearms factory there. On November 3, the regiment took part in the Battle of Torgau where it was deployed near Loswig. In this battle, it lost 14 men wounded and 5 taken prisoners of war. Afterwards, it was detached to FZM Maquire's Corps and took up its winter-quarters around Dippoldiswalde. The garrison battalion was still at Peterwardein.

During 1761, the regiment remained with Lacy's Corps around Großenhain and saw no action. At the end of the year, it took up its winter-quarters near Radeburg.

In May 1762, the regiment was deployed in the corps of FML Brentano near Zobten (present-day Sobotka/PL). In July, this corps was sent to Burkersdorf (present-day Burkatow/PL) and Adelsbach (present-day Struga/PL). On July 6, it fought in the Combat of Adelsbach against a Prussian force led by Lieutenant-General Count Wied. The regiment captured 3 Prussian flags and Colonel Tillier distinguished himself (he would later receive the Maria-Theresia-Order on November 21 1763 for his conduct). In that battle, the regiment lost 22 men killed and 83 wounded. Brentano then went to Weckelsdorf (present-day Teplice nad Metují/CZ) and, on July 21, participated in the Battle of Burkersdorf where it lost 40 men killed, 88 men wounded, 26 men taken prisoners of war and 31 men missing. Captain Baron Portner and 223 men from the regiment were posted in the Fortress of Schweidnitz. During the Siege of Schweidnitz by the Prussians, this detachment lost 33 men killed and 24 wounded. The garrison was taken prisoners of war after capitulation of Schweidnitz. The regiment took up its winter-quarters around Eipel (present- day Úpice/CZ) and Königinhof (present- day Dvůr Králové/CZ).

In 1763, the regiment was sent to Austria and assumed garrison duty in the District of Carinthia. The garrison battalion came from Peterwardein to Temesvár.

Troopers were armed with a musket (Model 1745 for fusiliers, Model 1754 for grenadiers), a bayonet and a sabre.

Troopers were armed with a musket (Model 1745 for fusiliers, Model 1754 for grenadiers), a bayonet and a sabre.

Muhsfeldt mentions light green for the dolman, the cuffs and the lining of the coat of the 1757 uniform.

The Bautzener Bilderhandschrift illustrates the 1762 uniform with the following differences:

Donath illustrates a white within dark red cockade and light blue tassels in the lateral cornes of the tricorne.

As per the Bautzener Bilderhandschrift, the officers wore a different uniform in 1762:

As per a regulation of 1755, musicians were now distinguished from troopers only by swallow nests on the shoulders.

Michael Zahn for gathering initial information about this regiment

Harald Skala for the detailed description of the origin, history and service of this regiment