The regiment was raised on March 15 1749 with troops contributed by other regiments of cavalry.

Somewhere between August 23 and September 6 1757, the regiment joined the Army of Saxony, led by prince de Soubise, in the area of Erfurt and Eisenach. On September 27, it was brigaded with Penthièvre Cavalerie under M. de Bezons in the first line of the left wing of the Franco-Imperial Army. On November 5, the regiment took part in the battle of Rossbach where it was brigaded with Lastic de Saint-Jal Cavalerie and Condé Cavalerie in Saint-Germain's corps. At the end of the year, it took its winter quarters in Münzenberg and Ortemberg in Hessen.

By July 1758, the regiment had joined Soubise's army assembling near Friedberg in Hesse.

In June 1759, at the beginning of the French offensive in West Germany, the regiment was part of the “Right Reserve” under the command of the duc de Broglie who had taken position at Friedberg in Hesse. 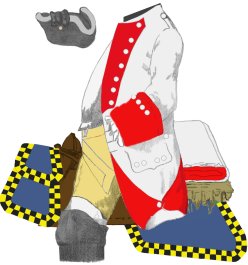