The regiment was created on September 9 1684. Indeed, expecting a Coalition to soon form against France, Louis XIV raised 30 new regiments from September 1 to 30 for the defence of the various places of the realm. By raising one regiment a day, he avoided any problem of precedence among these new regiments.

At the beginning of the Seven Years' War, the regiment was stationed in Bretagne to defend the coasts against British incursions. By August 1 1757, it was stationed at La Rochelle in the Aunis country. 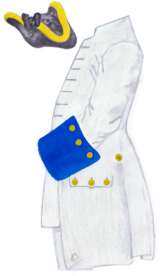