The regiment was created on February 16 1626 when the Finnish Grand Regiment was divided into smaller units.

In 1634, a government regulation ranked the Björneborgs Regiment sixth among the infantry regiments.

During the Great Northern War, transferred to Riga in the Spring 1700, fortress garrison thereafter. With Lewenhaupt to the Ukraine, 1708. After the battle of Ljesna, 1708, the survivors were placed under Västerbottens regiment and captured after Poltava. Reraised in 1710 and belonged to the Army of Finland. In the campaign against Trondhjem with Armfeldt, 1718

This Finnish regiment counted 1,025 men and consisted of two battalions of 4 companies. Each company should have consisted of 140 men.

Initially, the regiment was not involved in this war and remained in Scandinavia.

In 1761, 4 companies (500 men) of the regiment were transported to Pomerania to reinforce the Swedish army fighting Prussia. 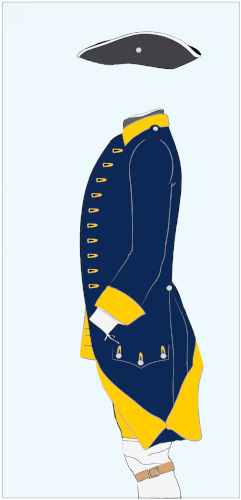 Musicians usually wore a yellow coat with white swallow nests on the shoulders.

The drum had a brass barrel decorated with a brown bear wearing a gold crown and surrounded by two white six pointed stars. Rims were blue edged yellow.