On July 26 1757, during the French invasion of Hanover, the regiment took part in the Battle of Hastenbeck where it was detached to scout along the Weser along with Luckner Hussars (1 sqn) and Bückeburg Carabiniers (1 sqn).

On May 26 1758, the regiment was with Ferdinand of Brunswick's main force in the camp of Nottuln. On May 27, it was transferred to Wangenheim's Corps at Dorsten. On May 31, this corps accompanied Ferdinand in his offensive on the west bank of the Rhine. The same day, after the capture of Kaiserwerth, Wangenheim garrisoned the town with light troops, some foot and Bock Dragoons, placing this garrison under the command of Lieutenant-Colonel Walthausen. On June 18, the regiment was part of Wangenheim's Corps who passed the Rhine at Duisburg. On June 23, the regiment took part in the Battle of Krefeld where he was deployed on the right wing under the command of the Erbprinz (Hereditary Prince) of Brunswick. On October 10, the regiment was present at the Battle of Lutterberg where it was placed in the first line of the left wing.

On July 31 1760, during the campaign of 1760, the regiment took part in the Battle of Warburg where it was deployed in the third line of the centre between Ossendorf and Menne. During the night of September 5 to 6, the regiment was part of an Allied detachment who passed the Diemel near Warburg. This Allied detachment made a junction with Bülow's light troops at the village of Witzen (unidentified location), about 5 km on the other side of the Diemel. The plan called for Bülow to turn the town of Zierenberg and to take post between this town and Dierenberg (probably the village of Dörnberg or the height of Dörenberg). The Allied force was guided by townsmen as well as deserters who manage to avoid outposts. The regiment along with 2 grenadier battalions and Block Infantry were posted between Malsburg and Zierenberg. At about 2:00 a.m. on September 6, the Allied column was detected when it had almost reached the town. The Allied grenadiers, drove back the detachment of Volontaires du Dauphiné guarding the Warburg Gate and entered into the town while two other gates were masked by Allied dragoons and 2 Hessian battalions. The Allies surprised several French soldiers before they had time to come out of the houses and assembled in the churchyard. Meanwhile, the 2 dragoon regiments masking the other gates made an attempt against the Duremberg Gate but were repulsed by 400 French grenadiers. These dragoons made another unsuccessful attempt against another gate before managing to enter the town through a breach. At 3:00 a.m., the Hereditary Prince, fearing the arrival of reinforcements from the nearby French army, ordered retreat. By 8:00 a.m., the victorious Allied column was back to Warburg. On October 16, the regiment was at the Battle of Clostercamp but did not take part in the action, being attached to a containing force under Major-General von Bock posted north of Rheinberg.

On July 16 1761, the regiment took part in the Battle of Vellinghausen where it was deployed on the right wing under the Hereditary Prince.

By May 23 1762, for the incoming campaign, the regiment was attached to the Corps of the Hereditary Prince operating in Westphalia. During the night of June 24 to 25, the Hereditary Prince advanced up to Buer with 4 sqns (detachments of Brunswick Carabiniers, Hessian Gens d'Armes, Bock Dragoons and Jung-Bremer Cavalry) and fell into an ambush drawn in a wood near Recklinghausen by the Dragons Chasseurs de Conflans. The Hereditary Prince was himself captured by 2 French hussars before being delivered by 20 troopers of Bock Dragoons. In this action, the Allies lost 20 men killed and 200 troopers taken prisoners; the French a few men killed and about 15 wounded. On July 23, the regiment took part in the second combat of Lutterberg where it was deployed with the cavalry protecting the flank at Winterbühren. On September 21, the regiment was at the Combat of Amöneburg where it was attached to Zastrow's Corps occupying the ground immediately before the Brücker Mühle.

Uniform in 1757 -
Source: Richard Couture from a template by Hannoverdidi

Troopers were armed with a Pallasch straight steel hilted sword, two pistols, a musket and a bayonet.

Musicians were dressed in reverse colours and probably wore shoulder laces. The staff kettle-drummer probably carried NCO distinctive. His kettle-drums were made of brass (they had been captured at Blenheim on August 13 1704) and had a red apron fringed gold carrying a device consisting of the Arms of England supported by a Lion and a Unicorn within the Garter; the motto “DIEU ET MON DROIT” underneath.

As dragoons, the musicians were drummers. The likely drum pattern would have been similar to the foot with hoops in alternating facing colour and red diagonal stripes, white drum cords over a brass drum with the Arms of Hanover in the centre. 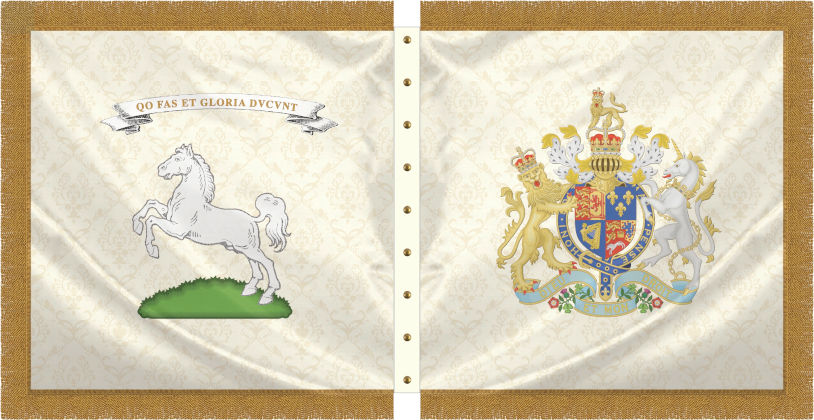 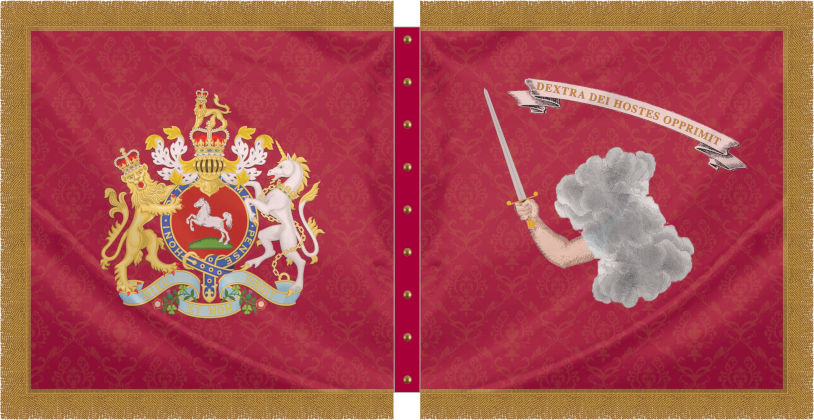 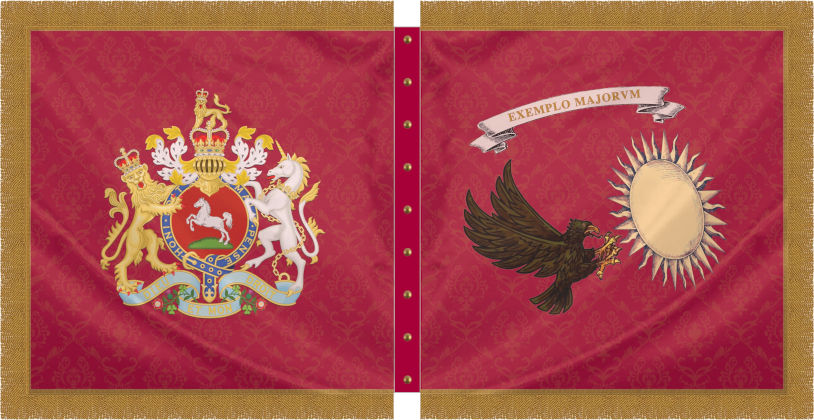 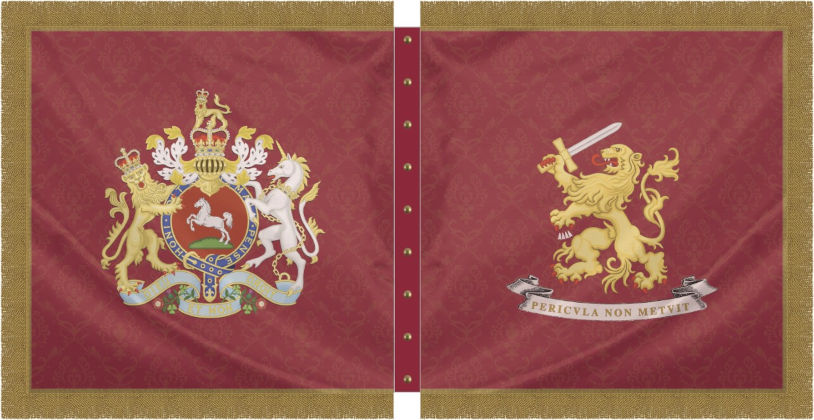