The regiment was created from various cuirassier companies serving in the County of Rosellon on March 11 1640 and assembled on June 15 of the same year.

On May 2 1659, the unit was reorganised as a tercio and designated as “Tercio de Cabaleria del Rosellon”.

In 1662, during the Portuguese Restoration War, the tercio joined the Army of Extremadura and took part in the campaign in Portugal, in the siege and capture of Juromenha and in the occupation of Veyros, monforte and Crato. At the end of the year, it was transferred to Catalonia. In 1663, the tercio was sent back to Portugal where it took part in the siege of Evora and in the Battle of Ameixial before retiring to Extremadura. In 1664, it entered into Portugal once more, taking part in the capture of Cabeza-da-Vide and Arronches. In 1665, it fought in the Battle of Montes Claros. In 1666, it campaigned in Portugal. In 1667, it contributed to the defence of Albuquerque. In 1668, it retired to Extremadura and was later transferred to Catalonia.

In 1674, when Spain got involved in the Franco-Dutch War (1672–78), the tercio took part in the siege of Bellegarde and in the Battle of Maureillas. In 1676, it was sent to Navarre. In 1678, it was at the unsuccessful defence of Puigcerdà.

In 1684, the tercio took part in the defence of Gerona.

In 1699, the tercio was sent to the Military District of Andalusia.

In 1701, at the outbreak of the War of the Spanish Succession (1701–14), the tercio was posted in the harbour of Santa Maria. In 1702, it took part in the successful defence of Cádiz]. In 1703, the regiment was renamed “Rosellon Viejo” to distinguish it from the newly raised “Rosellon Nuevo”. In 1704, it took part in the campaign of Portugal; in 1705, in the defence of Badajoz; in 1706, in another campaign in Portugal and in the expedition in the District of Valencia; in 1707, in the Battle of Almansa and in the siege of Lérida; in 1708, in the siege of Tortosa; in 1710, in the expedition against Ivars d'Urgell, in the Battle of Almenar, in an engagement near Peñalva, in the the Battle of Saragossa and, maybe, in the Combat of Villaviciosa. In 1714, the regiment took part in the blockade, siege and capture of Barcelona.

In 1715, the regiment embarked for Majorca where it contributed to the capture of Palma.

In September 1717, two squadrons of the regiment embarked at Barcelona for Sardinia where they took part in the siege of Cagliari. On February 10 1718, the regiment was renamed “ Borbón Cavalry”. In June 1718, the two squadrons still stationed in Spain marched from Extremadura, embarked at Barcelona and landed at Palermo. In 1719, they took part in the Battle of Francavilla and in the relief of Messina. In 1720, the regiment returned to Spain but was soon redirected towards Ceuta which was besieged by the Moors. In 1721, it returned to Spain.

In 1726, the regiment was transferred to Andalusia. In 1727, it took part in the unsuccessful siege of Gibraltar. In 1728, it took up cantons in the District of Valencia.

In 1730, the regiment joined the corps assembling for the expedition against Oran which was taken on July 22 1732.

In November 1733, during the War of the Polish Succession (1733–35) two squadrons of the regiment embarked at Barcelona for Tuscany. In 1734, they took part in the Battle of Bitonto and in the reconquest of the Kingdom of Naples before being transferred to Palermo in Sicily. They then participated in the conquest of the island of Trapani before returning to Tuscany where they occupied Florence. In 1735, they were at the capture of Bari, Gaeta, Baya and Tortona. They were then transferred to Lombardy where they took part in the engagement of Quingentalli (June 5) and in the siege of Mirandola. They then sailed from Genoa to Antibes. On their way, they were attacked by Moorish and Turks vessels. In 1737, they returned to Spain.

In 1741, during the War of the Austrian Succession (1740–48), the first and second squadrons of the regiment were sent to Italy while the third and fourth squadrons were stationed in the region of Empordà in Catalonia. In 1742, the squadrons posted in Catalonia defended the coast to prevent a landing by the British in the area of Palamós. In 1745, the two squadrons campaigning in Italy took part in the sieges and capture of Serravalle and Tortona, in a surprise attack on Pavia, in the occupation of Casale Monferrato, and in the capture of Milan and Codogno. In 1746, the first and second squadrons occupied Vercelli and Guastalla, fought in the battles of Piacenza and Rottofreddo. In 1747, these two squadrons retired to Provence.

In 1749, the first and second squadron rejoined the third and fourth in Catalonia.

In 1762, the regiment was initially stationed in Valencia. On February 18, it set off for Zamora in Old Castile for the planned invasion of Portugal. On May1 , it was part of the first column to enter into Portugal. From May 17 to 22, the regiment participated in the sieges of Oteiro, Bragança and Chaves. On August 25, it was at the surrender of Almeida. Colonel Don Jacinto Pazuengos, Lieutenant-Colonel Don Francisco Sanjuan, 2 engineers, 25 foot jagers and 50 cavalrymen of the present regiment reconnoitred the Castle of Arronches. Another detachment under Commandant Don José Cadalso and Major Don Pedro Jacinto de Arcaya with other engineers reconnoitred Herrera. On September 9, the entire regiment marched from the camp of Aldea-Nova to Cerveira. On September 29, it drove the Anglo-Portuguese out of the Lines of the Talladas and surprise them at Vilhabelha. On October 31, it took up cantonments in Rozas. On November 14, it returned to Badajoz. On December 19, the regiment received orders to garrison the District of Badajoz.

On April 30 1763, the regiment was ordered to march towards Old Castile. 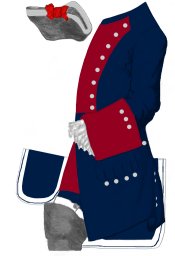 The standards of the regiment were made of crimson damask bordered in silver. The centre device consisted of an oak with an escutcheon hanging from its branches. This escutcheon had a green field with a red vertical bar.

At an unspecified date (probably when the regiment was renamed Borbón), the centre device was changed to three golden fleurs de lys on a blue field.