The regiment was created on September 5, 1684. Indeed, expecting a Coalition to form soon against France, Louis XIV raised 30 new regiments from September 1 to 30 for the defence of the various places of the realm. By raising one regiment a day, he avoided problems of precedence among these new regiments.

In 1698, the regiment integrated the men of the disbanded Villefort Infanterie.

In 1715, the regiment was placed in garrison at Toul and reduced to a single battalion.

In 1733, at the outbreak of the War of the Polish Succession (1733-35), the regiment served on the Rhine and took part in the siege of Kehl. In 1734, it took part in the attack on the Lines of Ettlingen and in the capture of Philisbourg; and in 1735, in the Combat of Klausen.

In 1742, during the [[War of the Austrian Succession[[ (1740-48), the regiment was sent to Bavaria and participated in the relief of Hauss. In 1743, it was part of the reinforcements sent to Maréchal Seckendorf but was forced to retire to the Rhine. In 1744, it took part in the Combat of Saverne. In the engagement of Augenheim and in the capture of Freiburg. In 1745, it served with the Army of the Rhine. In 1746, it was transferred to Flanders where it participated in the sieges of Mons and Saint-Ghislain and in the Battle of Rocoux. Afterwards, it was sent to the relief of the province of Provence. On November 11, it was increased to two battalions. In 1747, it fought in the Battle of Assietta where its colonel, the Marquis de Ruffey, was wounded.

On November 15, 1748, the regiment was reduced to a single battalion. A second battalion would later be raised in April 1762.

During the Seven Years' War, the regiment ranked 74th and was under the command of:

By August 1, 1757, the regiment was stationed in the towns of Châteaulin, Le Faou, Crozon and Camaret in Bretagne.

In 1758, the regiment garrisoned Saint-Malo along with Brie Infanterie. On September 10, during the second British expedition against the coasts of France, it joined the French force assembling at Lamballe to attack the retiring British army. On September 11, the regiment took part, under the Comte de la Tour d'Auvergne, in the combat of Saint-Cast where it initiated the first assault against the British force raiding the coasts. In this combat, the regiment suffered heavy losses and its colonel was severely wounded.

In 1761, the regiment was sent to Saint-Domingue (Haiti). On April 30, 1762, the regiment was increased to two battalions by integration various detachments of other units serving in the colonies. It returned to France only in 1764. 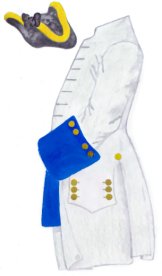 The colonel flag was white with a white cross. Ordonnance flags had a white cross and four green cantons. Each canton was traversed by a two adjacent diagonal bands: violet and isabelle (coffee). The ordonnance flags remained unchanged from 1684 to 1791.