The regiment was created in 1584 from the old Bandes de Montferrat. On March 6, 1597, it became part of the regular French Army. In 1598, the regiment was reduced to a single company (company of the mestre de camp) but was soon re-raised for the War in Savoy. It was disbanded twice (1601 and 1604) before being re-raised on February 16, 1610. From then on, it has been a permanent regiment of the French Army. Until February 1, 1673, it would be a gentleman regiment bearing the names of its successive colonels.

By August 1, 1757, the regiment was garrisoning Dunkerque in Flanders.

In 1760, the regiment was sent to Germany along with Alsace Infanterie and Normandie Infanterie. By May 23, the regiment was part of the left reserve of the first line of Broglie's Army, placed under the command of Saint-Germain. On July 31, the regiment took part in the Battle of Warburg, where it was initially deployed en potence at the extreme left of the first line. At 1:30 p.m., when the British grenadiers began to file through Ossendorf, the regiment retired without firing. However, when it was realized that the British grenadiers were aiming at a steep hill overlooking the French positions, two battalions of the regiment turned back and marched off to occupy the hill. A fierce struggle for the hill ensued but the French were finally driven back. After the defeat, the regiment retired to Cassel. In November, it was at the action near Oldendorf. By December 30, the regiment had taken up its winter-quarters in Gilserberg.

In March 1762, the regiment formed part of the Army of the Upper Rhine, under the Prince de Soubise, and was stationed at Melsüngen in the area of Göttingen. On June 19, it joined the army at Kassel. On June 24, it took part in the Battle of Wilhelmsthal, where it was deployed in the second line of the infantry centre. On July 1 near Felsberg, the regiment momentarily contained the Allied cavalry and forced it to retire making some British prisoners. By July 12, it was posted on the Schwalm River under Rochambeau. On November 20 Louis XV issued his instructions regarding the French armies serving in Germany, specifying which units should return to France right away and which should stay in Germany till the final evacuation; the regiment was among those which remained in Germany. 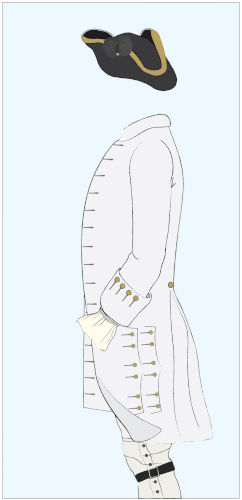