From 1716, the garrison place of the regiment was Stettin. It recruited in the districts of Pyritz, Randow, Greifenhagen and Saatzig and in the towns of Stettin, Damm, Poelitz, Bahn, Werben, Freyenwalde, Jacobshagen and Zachan.

From 1741, Prinz von Braunschweig-Bevern commanded the regiment for much of the Age of Reason. During his 40 years tenure (1741-1781), his emphasis was on drill over leadership. This was seen as one of the underlying reasons for the near collapse of the unit at Zorndorf.

The numbering system (Stammliste) was first used by Leopold I., Fürst von Anhalt-Dessau (Der alte Dessauer) in the Dessauer Spezifikation from 1737. Around 1780 the numbers were used in the printed Stammlisten, still with some variations for the fusilier regiments. It became official by "Cabinets-Ordre" from October 1, 1806. The present infantry regiment was attributed number 7.

The regiment began the war as an elite unit but became a regular unit after nearly collapsing at Zorndorf.

On August 26 1756, when the Prussian Army was ordered to proceed to the invasion of Saxony, the regiment was part of the left column led by the Prince of Bevern. This column had concentrated in the area of Lübben, then advanced through Lusatia by Hoyerswerda and Bautzen, to Hohenstein (Sept. 8) then to Lohmen north of the Elbe near Pirna. On October 1, the regiment took part in the Battle of Lobositz. It was assigned to the brigade of Lieutenant-General von Bevern. During this battle, the regiment advanced on the left flank, along with the regiments Itzenplitz, Alt-Kleist and the Grenadier Battalion 3/6 Kleist, to engage the Grenzers stationed on Lobosch Hill. The attempt to advance through the skirmish screen proved difficult, however, with ammunition running low, the Prussians adapted to the conditions of the terrain, abandoning closed formations and picking and choosing their targets using individual fire. Gradually the Austrians, despite reinforcements, were pushed off the Lobosch Hill and forced back through the burning streets of Lobositz. After an hour of intense fighting led by this unit and the Grenadier Battalion, the Austrians were forced out. They retreated in good order. A couple of weeks after the battle, on October 23, when Keith's Army left Lobositz to return to Pirna, the regiment was part of the left column. On October 28, Keith's Army reached Gross-Sedlitz near Pirna and took its winter-quarters soon afterwards.

In April 1757, during the invasion of Bohemia, the regiment was part of the column led by the Duke of Brunswick-Bevern. It was detached from the main column before the Combat of Reichenberg and did not take part in this action. On May 6, the regiment did not take part in the Battle of Prague, it was rather deployed on the left bank of the Moldau near the Weissenberg as part of Keith's Corps. It then participated in the Siege of Prague. On June 18, the regiment took part in the Battle of Kolin where it was deployed in the first line of the infantry left wing under Lieutenant-General von Tresckow. At the end of the afternoon, it reinforced Hülsen's Corps which was under heavy pressure near Krzeczhorz Height. The regiment then attacked the Austrian Deutschmeister Infantry positioned atop this height. In the ensuing rout, the two infantry battalions were overrun and shattered into the nearby village of Bristvi. On July 27, the regiment, which had suffered so much at Kolin, was detached under General Manteuffel to reinforce the Prussian forces defending Pomerania against the Swedes. By September, it had joined the small Prussian corps in Pomerania.

On August 25 1758, the regiment fought at the Battle of Zorndorf where it was brigaded with Dohna Infantry under the command of Major-General Diericke, forming part of the first line of the left division led by von Kanitz.

From January to May 1759, the regiment was present at the Siege of Stralsund. On July 23, it took part in the Battle of Paltzig where it was attached to Manteuffel's Division deployed on the right in the first line of infantry. The brigade joined the third assault on the Russian centre. In furious close combat, in heat, powder smoke and dust, it managed to break through the first Russian line. Manteuffel was seriously wounded and his adjutant was struck down. However, with ammunition low, the brigade had to retreat and the assault collapsed. A few weeks later, on August 12, the regiment fought in the Battle of Kunersdorf where it was deployed in the first line of the left centre as part of Diericke's Brigade which formed part of the initial attack along the Kleiner Spitzberg. Later during the battle, it routed along with the East Prussian regiments, incurring Frederick's permanent disfavour.

In July 1760, the regiment was present at the Siege of Dresden. On November 3, the regiment took part in the Battle of Torgau in Hülsen's second column, it attacked twice the Suptitz Heights from the north-west suffering heavy losses.

On October 29 1762, the regiment took part in the Battle of Freiberg. Now considered a second line troop, it was brigaded under Stutterheim with various Freikorps, including Frei-Infanterie le Noble, on the left wing. The brigade supported the Prussian attack on the weakest part of the allied position, namely the heights held by the Reichsarmee. As planned, the Reichsarmee position collapsed allowing the regiment to capture five cannon and a standard. 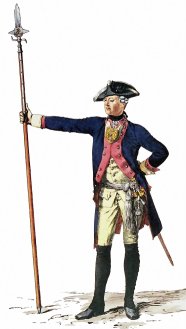 Michael Zahn for the variants of the uniforms.