The regiment was created on September 14, 1684 from a battalion of Normandie Infanterie ] and named after the Province of Bresse.. Indeed, expecting a Coalition to form soon against France, Louis XIV raised 30 new regiments from September 1 to 30 for the defence of the various places of the realm. By raising one regiment a day, he avoided any problem of precedence among these new regiments. The regiment was given to René-Alexis Le Sénéchal, Comte de Carcado-Molac.

During the War of the Polish Succession (1733-35), the regiment remained in France.

In 1756, the regiment was stationed on the coasts of Normandie.

By August 1, 1757, the regiment was stationed at Granville in Lower Normandy. Later the same year, it was transferred to Bretagne to defend the coast against British incursions.

On September 11, 1758, the regiment took part to the combat of Saint-Cast. 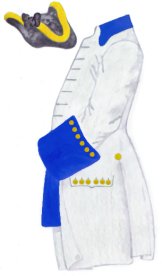