The regiment was created in Germany on February 4 1644 by the Cardinal Mazarin. It was initially designated as “Mazarin-Français” and consisted of 2,500 men in 30 companies. Soldiers came from the remnants of regiments who had been decimated at Rothweil, including two regiments from Bretagne who had belonged to the Maréchal de Guébriand and to the Marquis de Castelnau-Mauvissière.

In 1650, during the Fronde (1648-1653), the regiment defended Mouzon against the rebels, took part in the relief of Guise, defended Laon, in the relief of Mouzon and in the capture of Réthel. In 1651, when the Cardinal Mazarin was forced to leave France, the regiment became the property of the Queen Mother and received the name of the Province of Bretagne (Britanny). During the troubles of the Fronde, the regiment also took part in the combats of Bléneau, Étampes and Faubourg Saint-Antoine. In 1653, it participated in the submission of Bordelais and in the blockade of Bordeaux.

After the war, the regiment was stationed in Péronne where it remained until 1669. In 1666, it was reduced to only two companies.

In 1669, the two companies of the regiment were sent to the relief of the Venetian troops defending the Island of Crete and took part in the defence of Candia (present-day Heraklion). By the time of its return to Toulon, the regiment was virtually annihilated.

In 1684, the regiment took part in the siege of Luxembourg

In 1688, at the outbreak of the Nine Years' War (1688–97), the regiment joined the Army of Germany and garrisoned Mainz after its capture. In 1689, it took part in the defence of Mainz where it suffered heavy losses. After the capitulation of Mainz, it was sent to Huningue. In 1690, the regiment was sent from Huningue to Bourg en Bresse and was later transferred to Provence. In 1691, it took part in the capture of Veillane and in the sieges of Camagnola, Côni and Montmélian; and in 1692, in the protection of Pinerolo and Susa; in the Battle of Marsaglia and in the relief of Casale, Saluzzo, Pinerolo and Susa, and in a combat near Morelta. In 1693, the regiment was transferred to Catalonia. In 1695, it returned to the Alps. In 1696, it initially took part in the siege of Valencia but was later sent to Catalonia. In 1697, it was at the siege of Barcelona.

In 1714, the second battalion, raised during the war, was disbanded.

In 1732, the regiment took part in the training camp at Aimeries-sur-Sambre.

In 1733, at the outbreak of the War of the Polish Succession, the regiment formed part of the army who occupied Lorraine. In 1734, it served on the Rhine and took part in the attack against the Lines of Ettlingen and in the siege of Philisbourg. In 1735, it operated in the Electorate of Trier and fought in the Combat of Klausen.

In April 1742, during the War of the Austrian Succession, the regiment set off from Normandy for Bavaria where it contributed to the capture of Elnbogen and Caaden and to the relief of Braunau. Its two grenadier comapnies were taken prisoners but soon exchanged. In 1743, it retired from Bavaria and returned to France. In 1744, it served on the Moselle and fought in an engagement near Saverne. It then participated in the attack on the entrenchments of Suffelsheim and in the siege of Freiburg. In 1746, the regiment was transferred to the Netherlands and took part in the siege of Mons and in the Battle of Rocoux. In 1747, it was transferred to Provence where it took part in the conquest of Nice and in the relief of Vintimille.

In 1755, the regiment was sent to the camp of Valence.

During the Seven Years' War, the regiment ranked 29th and was under the command of:

In 1756, the regiment was at the camp of Valence. It embarked at Toulon for the expedition against Minorca. It distinguished itself at the assaults of Fort Malborough and Fort Mahon. During the siege, it lost Grenadier Captain Saint-Alby and Lieutenant Dupérier, killed; Captain Bellegarde and another lieutenant, wounded. The regiment returned in France after the capitulation and was immediately sent to Germany to join the army of Maréchal d'Estrées.

In August 1757, the regiment joined the Army of the Lower Rhine in Hessen. It then participated in the conquest of Hanover and the capture of Minden. It pursued the enemy up to Kloster-Zeven. At the end of the year, the regiment took its winter-quarters in the first line at Verden on the Aller River.

In January 1758, the regiment was allocated to Broglie's Corps who advanced on Bremen. On February 23, when Ferdinand of Brunswick launched his winter offensive, an Allied column attacked the small town of Hoya with its bridge on the Weser. A detachment of Bretagne Infanterie (all its grenadiers and 100 fusiliers) left its cantonment at Burghausen and came to the help of the Gardes Lorraines who were defending the bridge of Hoya. The detachment of Bretagne Infanterie took position beyond the bridge on the opposite bank of the river. Meanwhile, an Allied detachment had crossed the Weser on rafts and attacked the flank and rear of the French position while the main Allied column attacked frontally. The Bretagne detachment isolated on the opposite bank first resisted but was obliged to capitulate. After this action, the rest of the regiment retired to Osnabrück, and later to the Lower Rhine with the French army. From March 30 to April 4, it was in the second line of Clermont's Army in the camp of Wesel on the Lower Rhine. In April, when Clermont redeployed his army along the Rhine, the regiment was stationed at Gennep. After the successful crossing of the Rhine by Ferdinand's Army on May 31, the regiment retired towards Rheinberg where it joined Clermont's Army on June 2. It remained in this camp until June 12. It was placed in the centre of the first line. On June 23, the regiment took part in the Battle of Krefeld where it was placed on the right wing of the first line under Chevert. In Mid August, after Ferdinand's retreat to the east bank of the Rhine, the regiment, as part of the Army of the Lower Rhine under Contades, recrossed the Rhine to follow the Allied army. On August 20, the regiment was encamped near Wesel where it was placed in the centre of the first line.

On July 23 1762, the regiment took part in an encounter on the Fulda where Captain du Portal and a lieutenant were wounded.

At his return in France in 1763, the regiment was placed in garrison at Fort-Louis on the Rhine and, in May, transferred to Huningue. 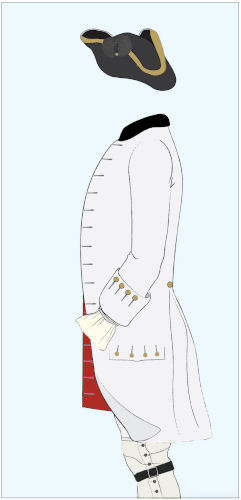 Colonel colour: exceptionally, this regiment did not carry any royal distinctive on its colonel colour. Indeed, the colonel colour was white bearing the golden arms of Bretagne surrounded by palm branches (right) and laurel branches (left) bounded by a red ribbon. The motto "POTIUS MORI, QUAM VINCI" appeared at the top of the flag. This motto was replaced in 1757 by "POTIUS MORI QUAM FAEDARI".

Ordonnance colours: a white cross with black hermines. Their 1st and 4th quarters were aurore, their 2nd and 3rd black.