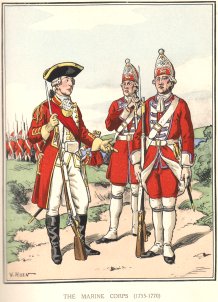 The military soon realised the advantage of having troops trained to the use of arms on board of ships, as well as on land.

In 1664, on the eve of the Second Anglo-Dutch War (1665-67), King Charles II created a corps for sea-service. This corps was commanded by the Duke of York (afterwards King James II), then Lord High Admiral of Great Britain, and was designated “The Admiral’s Maritime Regiment.”

In 1672, at the outbreak of the Third Anglo-Dutch War (1672-74), battalions for sea-service were formed by drafts from the land-forces. Several companies of the Foot Guards were employed on the Marine duty. On June 7, these companies took part in the Battle of Solebay against the Dutch fleet. They were also engaged in several other actions during the war.

In 1689, King William III incorporated “the Admiral’s Regiment” (which was then considered the third regiment of infantry) in the 2nd Coldstream Regiment of Foot Guards. About the same time, two Marine regiments were established for service on board the fleet, but were disbanded in 1698.

In 1702, during the War of the Spanish Succession (1701-13), the British Parliament enabled Queen Anne to increase the efficiency of her navy, by forming Corps of Marines, which could act at sea as well as on land. On 1 June, six regiments were accordingly added to the regular Army as Marine corps, and six other of the regular regiments of infantry were appointed for Sea-service. Colonel William Seymour was nominated to superintend the Marine forces and promoted to brigadier-general.

During the reign of Queen Anne, certain Independent Companies of Marines were raised for the purpose of aiding in the defence of the British possessions in the West Indies.

In 1713, at the end of the war, three regiments of Marines were disbanded and three others were incorporated in the land forces as the 30th Foot, 31st Foot and 32nd Foot.

From 1714 to 1739, no corps of Marines, except four invalid companies, were kept on the establishment of the army.

In 1739, when Great Britain declared war to Spain, six regiments of Marines were raised. To speed up the formation of these corps and to render them effective, five men from each company of the regiments of foot-guards were appointed sergeants and corporals and a bounty of 30 shillings was offered to each of the 1,800 men who volunteered from the regiments of infantry to the marine corps. In October, 200 Marines took part in the expedition of Admiral Vernon against Porto Bello.

In January, 1740, an augmentation of 340 men, and of 1 lieutenant in each company, was made in each of the six regiments of Marines, and 20 men were added to each of the four companies of invalids, and a similar number to the retired marine establishment. Furthermore, four new regiments of Marines were raised. Each regiment consisted of ten companies of 100 men each for a total of 1,155 men per regiment, including officers. The six regiments raised in 1739 were increased to the same numbers of officers and men. Finally, an additional regiment of Marines of four battalions was authorised to be raised at New York in America. In 1741, the first six regiments of marines and the American regiment took part in the unsuccessful expeditions against Cartagena in South America and Cuba in the West Indies. At the end of these disastrous expeditions the British regiments of Marines which had taken part had been reduced to some 200 men per regiment while the four battalions of the American regiment of Marines counted a total of less than 500 men. In 1743, 600 Marines took part in another unsuccessful expedition against La Guira near Caracas.

In 1744, after the declaration of war of Great Britain to France during the War of the Austrian Succession (1740-48), the British Parliament granted a force of 11,500 Marines for the current establishment. The most active measures were adopted, by order of the Secretary at War, for again completing the ten regiments of Marines, to render them effective as speedily as possible. In 1745, Marines took part in the siege and capture of Louisbourg in North America. For 1746, the military establishment counted 12,000 Marines. Some Marines took part in the expedition against Lorient. For 1747, the military establishment counted 11,150 Marines. In 1748, Marines served in Boscawen’s expedition on the Coast of Coromandel in the East Indies.

In November 1748, after the Treaty of Aix-la-Chapelle, the ten British regiments of Marines were disbanded, the officers of which were placed on half-pay.

Early in 1755, on the eve of war, the Parliament voted an establishment of 5,700 marines (officers and men) in 50 companies in 3 Grand Divisions. These divisions were based in Portsmouth (17 companies), Plymouth (17 companies) and Chatham (16 companies). They were placed under the control of the Lords Commissioners of the Admiralty. An Act of Parliament was passed for the “Regulation of the Marine forces while on shore.”

From April 5, 1755, the Marine corps have constituted a branch of the permanent national force, and have been provided for in the annual votes of the House of Commons, on distinct estimates produced at each session, of the Navy, Army, and Marines. This was the first time that marine troops were established on a regular basis.

N.B.: the title "Royal" was not awarded to Marine regiments before 1802.

In 1755, the Grand Divisions were commanded by:

In 1763, after the peace, the total effective force of Marine regiments was dramatically reduced to 4,287 marines. 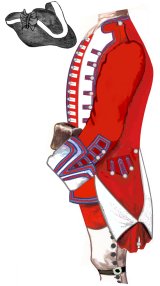 Soldiers were issued with a shorted musket (42" barrel), bayonet, and sabre.

The drummers of the regiment were clothed in white, lined, faced, and lapelled on the breast with red, and laced in such manner as the colonel shall think fit for distinction sake, the lace, however, was of the colours of that on the soldiers' coats.

The front or fore part of the drums was painted white, with the king's cypher and crown. The rims were red.

King's Colour (if any): Union with its centre decorated with a golden anchor in a rococo rose and thistle wreath.

Regimental Colour: white field with its centre decorated with a golden anchor in a rococo rose and thistle wreath. The Union in the upper left corner.