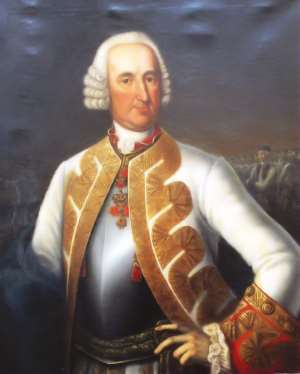 Maximilian Ulysses Browne was the son of the Austrian (more precisely k. k.) General Ulysses Baron von Browne and Anna Bella Fitzgerald of Ballynard. His father was an Irish noble who followed King James II in his exile in 1690 and who entered the imperial service.

In 1716, Ulysses Baron von Browne was made a Count of the Empire (Reichsgraf) by Emperor Charles VI. Meanwhile, Maximilian's uncle, Georg von Browne, became Field Marshal in the Russian army. Due to the influence of his powerful family, Maximilian Ulysses von Browne advanced rapidly through the ranks of the army.

Browne joined the Imperial army, as his father, and fought in Hungary.

On August 15, 1726, Browne married Maria Philipina Countess Martinitz. The couple got two sons (none of them had children):

In 1729, Maximilian Ulysses bought the estate of the Castle of Cerequitz (present-day Cerekvice nad Bystřicí) in Bohemia.

In 1732, the 27 years old Maximilian was already colonel of his uncle's infantry regiment.

In 1734, during the War of the Polish Succession (1733-35), Browne's conduct on the Italian theatre of operation, amply justified his promotion.

In 1735 in Tyrol, Browne distinguished himself as a general and was promoted General Feldwachtmeister

In 1737, Browne acquired his own infantry regiment: IR 36 Browne Infanterie. His behaviour during the Turkish War just reinforced his reputation as an able military man.

In 1739, Browne was promoted to the rank of Feldmarshall Lieutenant and assigned to the command of the Austrian garrisons of Silesia.

In 1741, at the beginning of the War of the Austrian Succession, Browne had to oppose the Prussian invasion of Silesia with insufficient forces. However, his judicious dispositions slowed the progress of the invaders and allowed Austria to assemble a field army. Nevertheless, Browne was forced to retire to Moravia where he joined the army under Count Neipperg. On April 10 1741, Browne then took part in the Battle of Mollwitz where he commanded the Austrian right wing. He was severely wounded during this battle. He also participated in the ensuing campaigns of 1742.

In 1745, while serving under Count Traun, Browne was promoted to the rank of Feldzeugmeister.

In 1746, Browne was sent to the Italian theatre of operation where he took part in the battles of Piacenza (June 16) and Rottofredo (August 12). Then, at the head of the advanced guard, he forced his way across the Apennines and entered Genoa. At the end of the year, he was placed in command of the army intended for the invasion of Southern France. However, the loss of Genoa forced him to retreat. This retreat was later recognized as a military masterpiece.

In 1747, Browne was placed in command of all the imperial forces in Italy.

In 1748, after the Peace of Aix-la-Chapelle, Browne was entrusted with the application of the peace conditions in Italy. He took part in the negotiations which led to the convention of Nice (January 21 1749).

In 1749, Browne was appointed commander-in-chief of the Siebenbürgen (present-day Transylvania) area.

In 1751, Browne was appointed commander-in-chief in the Province of Bohemia.

In 1753, Browne was finally promoted Feldmarshall. 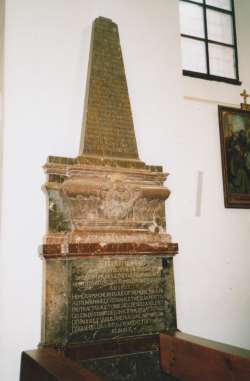 Memorial stone of Baron Maximilian Browne in the Church of St. Joseph in Prague, photo made by H. Skala

In 1756, when Prussia proceeded to the invasion of Saxony and thus initiated the conflict that would become known as the "Seven Years' War", Browne was still commanding in Bohemia. He quickly assembled his army and advanced towards Pirna where the Saxon army was encircled by superior Prussian forces. At the end of September, Frederick II manoeuvred to block Browne's advance and, on October 1, defeated him in the Battle of Lobositz, after a closely contested fight. Browne managed to retire from the battlefield in good order. He immediately designed a new attempt to relieve the Saxons at Pirna. With a picked force of 8,000 men, Browne advanced through difficult mountain tracks and finally reached Schandau on the opposite bank of the Elbe from Pirna. However, the Saxons were unable to break through the Prussian troops surrounding their position and had to surrender. Browne had to retire towards Bohemia.

In 1757, Browne was admitted in the Order of the Golden Fleece. For this campaign, Prince Charles of Lorraine received supreme command of the Austrian Army. For Browne, this was a serious setback. Nonetheless, he asked to serve under Prince Charles. On May 6 at the Battle of Prague, Browne commanded the Austrian right wing. He was mortally wounded while leading a bayonet charge of his grenadiers. He was unjustly held responsible for the failure of the campaign. On June 26, he died of his wounds in Prague.