From Project Seven Years War
Revision as of 21:16, 3 December 2021 by TheBaron (talk | contribs) (→‎Privates: Under "Other interpretations", I added a citation from Ortenburg's book, where he describes the facing color as "light blue")
(diff) ← Older revision | Latest revision (diff) | Newer revision → (diff)
Jump to navigationJump to search 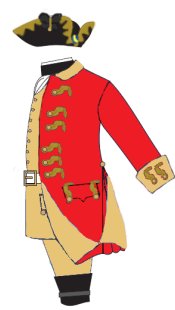 Officers wore uniforms similar to those of troopers with sliver lace on Kollett, cuffs and waistcoat. They also had a white and yellow plume on the tricorne; golden embroideries on sabretache and saddlecloth; silver and yellow sash.