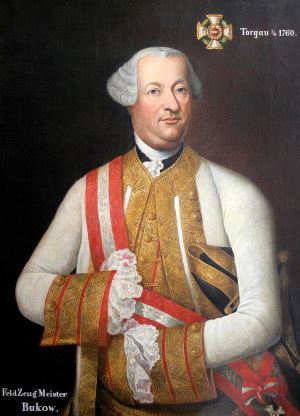 Adolf Nikolaus was born on January 7 1712. From early childhood, he was educated for a military career.

The precise date at which Buccow joined the Austrian Army is not know, but it was prior to the War of the Austrian Succession where he campaigned in Italy. He also fought against the Turks.

On November 12 1744, the Allies (Saxons under the Duke von Weissenfels and Austrians under Charles de Lorraine) agreed to cross the Elbe near Přelouč/CZ. To confuse Frederick II, Colonel Buccow with 1,000 commandeered cavalrymen was sent by Chrudim towards Königgrätz (present-day Hradec Králové/CZ). His appearance near Pardubitz (present-day Pardubice/CZ), where there was a Prussian magazine worried Frederick II. In fact, Buccow had received the order to destroy these magazines if possible. Meanwhile the Austro-Saxon army planned to cross the Elbe at Telčice/CZ on November 18, Buccow sent 1 Freikompanie and 100 hussars under Captain Crousaz to cross the Elbe near Sezemice/CZ. Buccow then advanced from Chrudim to Pardubitz. Upon Buccow's arrival, Colonel Retzow, commander of the place, put the suburbs afire. Buccow considered that the garrison was too strong for his attack to succeed. Meanwhile, Retzow received the order to leave Pardubitz. He set the magazines afire and evacuated the place. On November 22, Buccow, supported by some infantry, occupied Pardubitz. His troops extinguished the fire and saved part of the content of the magazines. Buccow then left some troops to garrison Pardubitz and advanced on Königgrätz. On November 26 around 4:30 a.m., Buccow attacked the Prussian outposts and occupied the suburbs. By the end of the year, Buccow occupied Mittelwalde (present-day Miedzylesie/PL). Prince Charles de Lorraine then sent Colonel Buccow with a detachment to Patschkau (present-day Paczkow/PL) to reconnoitre the positions of the Prussian in Silesia. On December 7, Buccow reached Patschkau. When Charles de Lorraine was informed that the Prussians had retired from the region, he decided to have some regiments taking their winter-quarters in Silesia.

At the beginning of January 1745, the Prussians also evacuated Oppeln (present-day Opole/PL) which was immediately occupied by Buccow's troops. Most Austrian troops stationed in Silesia were in fact poor quality Hungarian Insurgent placed under the command of FM Esterházy. GFWM Kheul vainly tried to persuade Esterházy act against the Prussians. Kheul then proposed to Charles de Lorraine to make an attempt against the Fortress of Cosel. Colonel Buccow received command for this endeavour. His force consisted of the Pandour Regiment, 200 men of Joseph Esterházy Infantry, 100 men of Sachsen-Gotha Dragoons and a few artillerymen (without any cannon!). On May 24, Buccow set off from Löwitz (present-day Lewice/PL) with his detachment and marched to Reinschdorf (present Reńska Wieś/PL), reaching his destination in the evening. At midnight, Buccow's troops advanced in total silence towards the walls, guided by Wnorowski, a Prussian deserter. Arround 2:00 a.m., Wnorowski, along with a corporal and 12 Pandours, passed the trench closely followed by 200 additional Pandours. The raid was successfull, the Pandours made themselves master of the guns crowning the walls. However, the Austrian artillerymen were not yet arrived and the Pandours could not handle the guns properly. Nevertheless, the Pandours attacked the Prussians. By 3:15 a.m., the fortress was in Buccow's hand. The Prussian commander, Colonel Foris, with 13 officers and 583 men where taken prisoners (93 of them immediately took service in the Austrian Army). At that time, an still unknown young captain was serving among Buccow's Pandours: a certain Gideon Laudon. The Austrians then put a new garrison (200 men of O'Gilvy Infantry, 200 men Joseph Esterházy Infantry and 200 Grenzers) under the command of Major Flandrini in Cosel. On June 3, Buccow was promoted to General-Feldwachtmeister (GFWM an equivalent to major-general in other armies) in recognition for his conduct at Cosel.

On August 3 1754, during peacetime, Buccow was promoted to Feldmarchall Lieutenant (FML), the promotion was retroactively effective to August 3 1752.

At the outbreak of the Seven Years' War in 1756, Field-Marshal Browne appointed Buccow commander of 3 regiments and sent him to secure the passes on the Bohemian border leading to Glatz. Furthermore, Buccow was supposed to act in conjunction with FZM Piccolomini. Unfortunately he was unable to persuade Piccolomini to leave his position around Königgrätz (present-day Hradec Králové/CZ) to support Browne at Lobositz.

On December 5 1757, at the Battle of Leuthen, Buccow commanded 3 cavalry regiments (Kalkreuth Cuirassiers, Erherzog Ferdinand Cuirassiers and Hessen-Darmstadt Dragoons) deployed on the left wing. He distinguished himself, losing two horses, commanding the rearguard during the retreat of the defeated army, and saving 19 canons and 2,000 wounded. Afterwards, Buccow supplied provisions to the garrison of the Fortress of Schweidnitz and moved the magazines from Landshut to Trautenau (present-day Trutnov/CZ). During winter, Buccow harassed the Prussians in Silesia.

On January 30 1758, Buccow was promoted to General der cavallerie (G.d.C.) and appointed commander of 4 regiments of heavy cavalry and of 3 hussar regiments. By the end of April, Buccow's Corps was stationed near Trautenau (present-day Trutnov/CZ). In May, during the Prussian invasion of Moravia, his corps sent to Nikel (present-day Mikulec/CZ) to operate under the command of FML Harsch. In mid-June Buccow's Corps was at Konitz (present-day Konice/CZ) to cover the march of the main army under Field-Marshal Daun to Gewitsch (present-day Jevíčko/CZ) where it arrived on June 16. From there the army moved to Protiwanow (present-day Protivanov/CZ) and established its main camp at Ewanowitz (present-day Ivanovice na Hané/CZ). During the Siege of Olmütz (present-day Olomouc/CZ) Buccow's Corps (approx. 8,000 men as per Austrian sources but only 5,000 according to Prussian sources) was posted at Ptín, blocking some Prussian troops and covering the movements of the main army. On July 1, Buccow sent Kaiser Hussars to attack the Prussian Zieten Hussars at Kosteletz (present-day Kostelec na Hané/CZ) with little success. After the retreat of Frederick II from Olmütz, Buccow marched with his corps to Oppatowitz (present-day Opatovice/CZ) to protect the magazines of Letowitz (present-day Letovice/CZ). On July 5, Buccow marched to Brüsau (present-day Březová nad Svitavou/CZ) and Bonau (present-day Borotín/CZ); and on July 6 to Polička (CZ). On July 7, his Grenzers had a skirmish with the Prussians (the two marching columns of General Neuwied). The same year, Buccow became proprietor of the former Lucchesi Cuirassiers, a function that he would retain until his death in 1764. On October 14 1758, Buccow took part in the Battle of Hochkirch where he commanded 7 cavalry regiments (Erzherzog Leopold Cuirassiers, Stampach Cuirassiers, Anhalt-Zerbst Cuirassiers, O'Donell Cuirassiers, Batthyányi Dragoons, Kaiser Hussars and Paul Anton Esterházy Hussars) attached to the first column of the left wing who initiated the attack.

On November 3 1760, Buccow took part in the Battle of Torgau where he commanded 5 cavalry regiments (Benedikt Daun Cuirassiers, Erzherzog Leopold Cuirassiers, Buccow Cuirassiers, Prinz Savoyen Dragoons and Batthyányi Dragoons). During the battle, he saved the Austrian infantry at a very critical moment with an attack of his cavalry who drove back the Prussians. After a while, two Prussian battalions and one dragoon regiment launched another attack on the Austrian infantry. Buccow at the head of O'Donell Cuirassiers stopped the Prussian attack and held his position until 3 Austrian regiments could come to his support. When Field-Marshal Daun was wounded, Buccow took command over the whole army for short time until he was himself wounded. Nevertheless he remained on the battlefield.

On December 22 1761, Buccow, for his conduct at Torgau, received the Commander Cross of the Maria Theresien Order in the sixth promotion of this military order. The wound that Buccow received at Torgau seems to have been quite severe because he did not return to the army anymore.

In 1762, Buccow was appointed Governor of Transylvania where he undertook the reorganisation of the Militärgrenze (military frontier) and the recruitment of new troops. Unfortunately, he was not able to finish this work. He died on May 18 1764 in Hermannstadt (present-day Sibiu/Ro).

Adolf Nikolaus Baron Buccow was married but the identity of his wife is not known. From his marriage, he had one son: Georg Baron Buccow, born in 1737 born at Haßbern near Hannover. Georg served in the Austrian Army from 1758 until his death at the siege of Belgrade on October 1789.

The family owned the estates of Pogorze and Lonczka in the Principality of Teschen (present-day Cieszyn/PL) until 1782.