The regiment was raised in on May 25 1734 by colonel Sury under the name of “Regimiento de Soleure”.

In 1745, the regiment was known as the “Segundo de Soleure”.

When the Swiss infantry was reorganised in 1756, the regiment counted 2 battalions, of 4 companies each. This reorganisation was completed only in 1758. 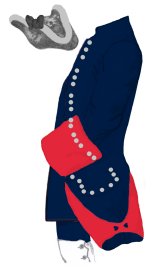 No information has been found yet about the battallonas colours of this Swiss regiment.