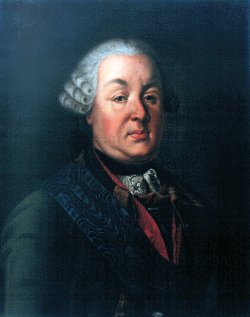 Buturlin was born in an old Russian boyar family, tracing its origin back to the XIIIth century. He studied at the Naval Academy of Sankt Petersburg for 4 years.

In 1720, after his graduation from the academy, Buturlin became the orderly and confidant of Tsar Peter the Great. He was employed on several secretive missions during the Persian expedition of 1722-23.

In 17??, Buturlin was promoted chamberlain and attached to the "junior court" of Elizabeth Petrovna. The young officer impressed the princess so much that she was said to cherish an affection for him until her very end.

During his reign (1727-30), Tsar Peter II, apparently jealous of Buturlin's influence on his beloved aunt, sent him away to Little Russia.

During the reign of Tsarina Anna Ivanovna from 1730 to 1740, Buturlin served against the Turks under Munnich. In 1735, he was named governor of Smolensk.

In 1741, when Elizabeth Petrovna acceded to the throne, Buturlin was sent to defend imperial interests in Lesser Russia. He then governed Livonia for a short time.

On December 12 1742, Buturlin was promoted commander-in-chief of troops in Moscow, an appointment which he kept until 1744.

In 1756, Buturlin was promoted to field-marshal.

On June 9 1762, Buturlin was appointed governor-general of Moscow by Peter III and charged of the preparation for the coronation of the new tsar. He retained this function until 1763 even though Catherine II had acceded the throne.

This article is mostly a compilation of the following Wikipedia articles:

IB Group History of authorities of the city of Moscow