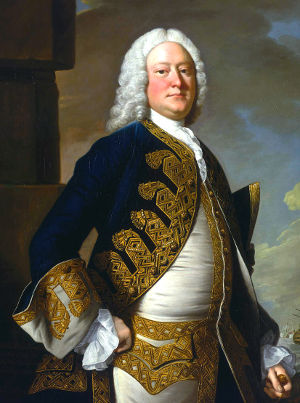 Detail of a portrait of John Byng by Thomas Hudson, 1749 - Source: Wikimedia Commons

In March 1718, at the age of 13, John Byng joined the British Navy. On August 11 of the same year, at the outbreak of the War of the Quadruple Alliance (1718-20), Byng took part in the Battle of Cape Passaro in Sicily.

In 1723, Byng was promoted lieutenant.

In 1727, Byng was promoted captain of the HMS Gibraltar.

In 1742, Byng was appointed Commodore-Governor of the Colony of Newfoundland.

In 1747, Byng was promoted to vice-admiral and appointed Commander-in-Chief of the Mediterranean Fleet.

In 1754, Byng commissioned the building of the mansion of Wrotham Park in his estate in Hertfordshire. He probably never lived there.

In 1756, Byng was serving in the Channel when the British received intelligence of the planned French expedition against Minorca. On March 8, the British Admiralty ordered to place a squadron under the command of Vice-Admiral Byng for the protection of Minorca. The squadron had to be ready by March 11. Byng was promoted admiral for the circumstance and was assisted by Rear-Admiral Temple West. Byng was given only 10 ships of the line to fulfill his mission. He was also directed to take on board the absent officers of the Minorca garrison and a reinforcement of troops, consisting of the 7th Royal Regiment of Fusiliers. To make room for these men, all the marines belonging to the squadron were sent on shore. On April 6, Byng's squadron finally set sail from St. Helen's for Minorca. On May 20, Byng's squadron made an attempt to relieve Fort St. Philip but after a timid Battle off Minorca, he withdrew towards Gibraltar. On May 24, Byng held a council of war on board the Ramillies (90). Considering that the fleet could not relieve Minorca and that Gibraltar would be in great danger if anything happened to the fleet, the council unanimously resolved to proceed to Gibraltar. This withdrawal virtually condemned the British garrison of Fort St. Philip who would finally surrender on June 28. At the end of May, news of Byng’s failure reached Great Britain. Sir Edward Hawke and Rear-Admiral Charles Saunders were immediately ordered to embark for Gibraltar. On June 19, Byng's squadron arrived at Gibraltar. The admiral at once began preparations to return to Minorca. On July 3, Hawke and Saunders arrived at Gibraltar on board the Antelope (54) while Byng was still engaged in preparations to return to Minorca. Hawke immediately assumed command of the British fleet. On July 9, the Antelope sailed from Gibraltar with Admiral Byng and Rear-Admiral West on board. On July 26, the Antelope arrived at Portsmouth after a short trip. Byng was immediately put under arrest for his conduct during the encounter of May 20. On August 19, Byng was landed and sent to Greenwich. There he remained in confinement until December 23, when he was removed to Portsmouth. On December 27, Byng's trial began on board the St. George (96) in Portsmouth harbour.

Byng’s trial continued until January 27, 1757. On that day sentence was pronounced, and the admiral was transferred to the Monarch (74), then in harbour. On March 14, Byng was executed at Portsmouth, aboard Monarch.

This article borrows most of the information for the period before 1755 from:

The section on the period after 1755 is mostly derived from our articles depicting the various campaigns, battles and sieges.