The regiment originated from an old Spanish tercio. Throughout its history, it was designated under various names:

On February 27 1566, the original tercio was raised in Córdoba and in the southern provinces of Spain. It then embarked for Italy at Cartagena and disembarked at Naples in the first days of 1567. In 1571, 12 companies of the regiment took part to the naval battle of Lepanto (October 7). By November 8 1573, the tercio counted 40 companies for a total of 6,647 men serving aboard the fleet, in Italy, in Tunis and in Malta. In 1580, Figueroa, the commander of the tercio, went to Spain to raise additional companies while most of its original companies were detached from his tercio to form new independent units. The new companies raised in Spain were reviewed on April 30 1580. They were send to garrison the recently conquered city of Lisbon. It then served in the defence of Portugal from 1581 to 1583 when it returned to Cadiz (September 15) before sailing for Italy. In 1585, the tercio marched through Germany to reach the Netherlands where their camp was flooded when the Dutch opened the dykes. In 1586, the tercio returned to Italy. By February 28 1588, the tercio counted 28 companies for a total of 1,593 arquebusiers, 537 musketeers and 778 pikemen. It joined the Invicible Armada in its failed invasion of England.

In 1603, the tercio was transferred to Portugal to escort convoys destined to India and America and to fight the Turk pirates infesting the coast. In 1614, it operated near Larache on the coast of Morocco with the fleet before returning to Lisbon where it remained until 1619. In 1620, the tercio went to Cadiz where it embarked aboard the fleet. While serving with the fleet, it took part to the naval battles of Ceuta (August 1 1621) and Malaga (October 6 1622). In 1624, it returned to Cadiz and part of the tercio was briefly sent to Mexico to quench an insurrection. In 1630, the tercio took part to an expedition against Barlovento in the Canary islands. In 1631, it was cantoned in Cartagena before sailing to Havana where it assumed garrison duty. In 1632, it returned to Cadiz. In 1634, the tercio was sent to Brazil to reconquer the places of Pernambuco and Paraiba from the Dutch. However, it was forced to retire. In 1635, it briefly returned to Cadiz before re-embarking for Brazil where it disembarked in the bay of Todos os Santos. It entrenched in the suburb of San Antonio where it was besieged by a Dutch force under the command of Maurice de Nassau, forcing Nassau to re-embark his troops.

In 1639, half the tercio joined the army of Catalonia to fight the French while the other half sailed for Brazil. In 1640, the first half of the tercio took part to the siege of Salses. In 1642, the entire tercio served aboard the fleet, taking part to 2 naval battles against the French. From 1643 to 1645, the tercio served in Catalonia against the French. In 1646, it served with the fleet, operating in the region of Agrigento and taking part to the relief of Orbitello where it suffered heavy losses. It then returned to Catalonia and then to Cadiz. In 1647 and 1650, it served in Italy, mainly in the region of Naples but also in Sicily. In 1650, it returned to Catalonia where it served until 1652 when it was sent against Naples once more. From 1653 to 1656, it served against the French in Spain. In 1657, after a brief sojourn in Cadiz, the tercio joined the army of Estremadura besieging Olivenza on the Portuguese border. This army finally seized Olivenza and Arronches. From 1658 to 1668, the tercio took part to the campaigns on the Portuguese border. When the Spanish army was reorganised in 1664, the tercio was renamed Tercio provincial de Córdoba on August 29.

In 1689, the tercio joined the army of the duke of Villahermosa who vanquished the French army of Noailles near Llinas on August 21. By the end of the year, the tercio embarked aboard a Spanish fleet sent to relieve Larache besieged by the Moroccans who repulsed the attempted landing, forcing the fleet to retire to Gibraltar. By June 11 1691, the tercio was at Gerona in Catalonia where it boarded the fleet destined to the relief of Alicante, blockaded by a French fleet, forcing the enemy to retire. In 1693, the tercio took part to another naval battle off Naples before returning to Catalonia. In 1694, it took part to a raid against Hostalrich. In 1695, it was sent to Morocco to relieve Ceuta besieged by a Moroccan army, successfully introducing 200 men in the place on May 6, breaking a general assault (July 31) and entering the place. On January 26 1696, a sally of the tercio against the besiegers was repulsed. In 1699, the tercio took part to the assault on Ciervo on July 24. In 1700, it took part to a naval battle against the French.

In 1701, the tercio took garrison at Ayamonte before being transferred to Cadiz. In 1702, 4 companies were sent from Cadiz to relieve Peñon encircled by an Arab force. They relieved the place and spent a few months there, before returning to Cadiz on August 10.

At the beginning of the War of the Spanish Succession, in 1702, the tercio defended the castle of Santa Catalina against an Anglo-Dutch force but was forced to evacuate the place in front of superior forces. It then retreated to Jerez where it was surprised by a Dutch force, loosing many men. The tercio then moved to the camp of Buenavista and took part to the victorious counter-offensive of general Villadarias in September, re-entering in Cadiz. In November, the unit was transferred to Badajoz. In 1703, it was assigned to the protection of the coastal batteries near Vigo. In 1704, while serving in Vigo, the tercio was transformed into a regiment and renamed Bajeles. At the beginning of 1705, the regiment garrisoned Ciudad-Rodrigo, it was later transferred to the army of Castile under the command of the duke of Berwick. On April 25 1707, the regiment distinguished itself at the battle of Almansa. It then took part to the siege of Alcoy in December of the same year. In 1708, it took part to the capture of Alcoy and Tortosa (July 10) before retiring to the district of Valencia. In November of the same year, it took part to the siege and storming of Denia. In December, it marched against Alicante which capitulated. In 1709, the regiment was transferred to theatre of operation of the Estremadura where it took part to the battle of Gudiña (May 7). In 1710, the regiment secured the pass of Noguera in Aragon. At the end of July, it took part to the attack on the enemy position near Lérida. On August 22, it fought at the battle of Torrero in Zaragoza where it suffered heavy losses, retreating to Old Castile. After reorganising its ranks the regiment was sent to the bank of the Tagus to observe the enemy positions. On December 9, it was at the storming of Brihuega. After this action, it constantly harassed the Allied rearguard. In 1711, it campaigned in the mountains of Spain. In 1713, it took part to the blockade and siege of Barcelona. In 1714, it continued to besiege Barcelona and, on September 11, its first battalion stormed the breeched walls of Barcelona while the second protected the batteries of Bellegarde. At the end of the war, the regiment was transferred to the district of Estremadura.

In 1717, the regiment was transferred to Malaga to garrison the town.

In 1718, the regiment took part to the expedition against Messina in Sicily, capturing the town on September 19. The second battalion then garrisoned the town while the first moved against an Austrian force. In 1719, the two battalions defended Messina against an Austrian attack but were forced to capitulate, on October 18, with the honours of war. In 1720, it served in Sicily once more, vainly defending Palermo. It then returned to Barcelona.

From 1723 to 1732, the regiment garrisoned Porto-Longone near Livorno in Italy. It returned to Barcelona in 1732.

At the beginning of the War of the Austrian Succession, the regiment joined the Spanish army who advanced through Roussillon and Provence to invade Piedmont. In 1742, this Spanish army operated on the frontier of Savoie. On January 8 1743, the regiment which had been sent to reconnoitre the Piedmontese camp fought an action near Aigueville. It then retired on the main Spanish army advancing by Montmelia, Briançon, Embrun and Barcelonette. In April 1744, it took part to the combats who led to the capture of Monte-Albano, Villefranche and Nice. The regiment joined Castelar's corps who advanced by Saint-Étienne, Isolo and the defile of Manza and crossed the Alps. Its grenadiers stormed the positions of Planches. The regiment then took part to the capture of Demont August 17) and to the blockade of Coni. Bad weather forced the Spaniards to lift the siege of Coni and to retire to Demont. At the beginning of the campaign of 1745, the regiment joined a force who tried to expel the Austrians from the county of Oneglia, moving from Saona to Carcare. The regiment then took part to the siege and capture of Piacenza (July 12). The first battalion passed the Tanaro with general Aramburu's corps on July 27 and fought at the victorious battle of Bassignano on September 27. It also participated to the siege and capture of Valenza. In 1746, the regiment left Valenza and joined maréchal Maillebois at the camp of Piacenza. It followed the Spanish army in its retreat across the Po river towards Nice. It relieved Vintimiglia and covered Tournon in Provence. In 1747, the regiment sailed from Marseille to Genoa and defended the place against an Austrian offensive. In 1748, at the signature of peace, the regiment went to Nice.

In 1749, the regiment returned to Barcelona. On June 24 1750, the regiment started its march towards Ceuta where it had been assigned to serve as garrison.

In 1753, the regiment along with other units made a sortie from Ceuta against the Moroccans who encircled the town. During this action, the regiment was led by its colonel D. José Saint Just, a fiery commander of undaunted spirit, who simultaneously gave orders and inspired his troops. The regiment attacked the extreme left of the enemy lines and drove back those who attempted to contain its impetuous advance. While the pick of the sappers attacked the fortified works built by the Moroccans, the valiant regiment accomplished what was the goal of the operation, setting fire to houses and tents. After this sortie, the Moroccans abandoned the blockade.

During the Seven Years' War, the regiment ranked 10th and was under the command of:

In 1756, the regiment quitted Ceuta and moved to Cádiz.

In 1762, when war broke out with Portugal, the regiment moved to the Portuguese frontier. However, it did not take part to the operations, his role being limited to the protection of the frontier. 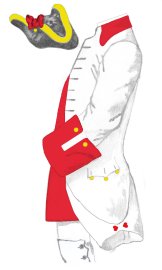 The coronela (colonel flag) of the regiment was white with a red Burgundian cross terminated in each corner by a medallion carrying the arms of the regiment (gold field with three horizontal red bands) surmounted by a golden crown. In the middle: the arms of Charles III surrounded by the necklace of the order of the Toison de Oro (Golden Fleece).

The batallonas (ordonnance flags) of the regiment were white with a red Burgundian cross terminated in each corner by a medallion carrying the arms of the regiment (gold field with three horizontal red bands) surmounted by a golden crown.