The regiment was created on January 23, 1676, during the Franco-Dutch War (1672-78), by Louis-Victor de Rochechouart, Duc de Vivonne. It was raised in the town of Messina in Sicily, part from a battalion of La Marine Infanterie, part from Sicilian recruits. It took part in the naval battle of Palermo and in the capture of Merilli and Taormina. In December 1677, it sailed for France. In 1678, it joined the Army of Flanders and took part in the sieges of Ghent and Ypres.

The regiment often changed its name: Vivonne, Thianges, de Mortemart, de Laval, de Tonnay-Charente... From 1676 to 1749, the regiment belonged to the Maison de Rochechouart. The family counts four colonels of the regiment.

In 1741, during the War of the Austrian Succession (1740-48), the regiment joined the Army of Flanders. In 1743, it was transferred to the Army of the Rhine and took part in the Battle of Dettingen where his colonel was killed. In 1744, it participated in the recapture of the Lines of the Lauter, in the combat of Suffelsheim and in the siege of Freiburg; in 1745, in the capture of Kronembourg. It was then transferred to the Army of Flanders and took part in the combat of Mesle and in the capture of Ghent. In 1746, it participated in the Battle of Rocoux; in 1747, in the conquest of the Dutch Flanders and in the siege of Berg-op-Zoom; and in 1748, in the siege of Maastricht.

During the Seven Years' War, the regiment ranked 62nd. It was under the command of:

On December 21, 1762, when the French army was reorganised, the regiment was disbanded and incorporated into Royal Infanterie.

In 1756, the first battalion of the regiment took part in the amphibious expedition against Minorca and in the capture of Fort St. Philip. Meanwhile, the second battalion remained in Provence to protect the coasts against any British enterprise.

By August 1 1757, the regiment was garrisoning Béziers and Narbonne in Languedoc.

In 1758, the 2nd battalion was part of the reinforcements sent from Brest to Louisbourg aboard du Chaffault's Squadron. It arrived at Louisbourg on May 31. A few days later, a British army landed nearby and undertook the siege of Louisbourg. The battalion was captured at the capitulation of the fortress at the end of July. It was brought back to Tavistock, West Devon, Great Britain.

In March 1759, the second battalion was exchanged and returned to France. In the summer and autumn, a few companies of the regiment were assigned to Thurot's Squadron which was blockaded in the harbour of Dunkerque by a British squadron under the command of Commodore William Boys. In October, Boys' Squadron was driven from his station by a gale. On October 15 at 5:00 p.m., Thurot seized the opportunity, slipped out through a thick fog and made to the northward. He then sailed for Ostend, Göteborg and later Bergen.

In January and February 1760, a detachment of the battalion took part in the famous expedition against the Irish Coasts. On February 28, on its way home, the squadron was attacked by the British. Several soldiers of the detachment were wounded. The detachment was finally taken prisoners and brought to Ramsey on the Isle of Man then to Belfast where it arrived on March 2. On May 10, it was freed and transported to France. The regiment spent the rest of the campaign of 1760 as well as the campaign of 1761 on garrison duty.

In 1762, the regiment was part of the French corps sent to the king of Spain for the planned invasion of Portugal, which was allied to the British. The regiment left France in March 1762. On August 25, it was at the capture of Almeida and those of a few little places on the Portuguese border. In then remained cantoned in Andalousia till the signature of the peace preliminaries. 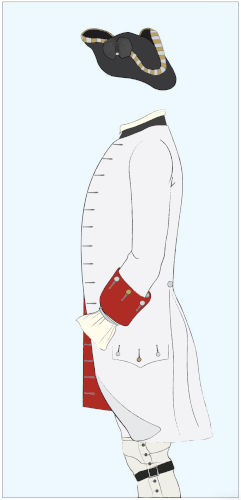 The colonel flag was white with a white cross. Ordonnance flags had four white cantons, each with three red waved lines, and a white cross.

N.B.: the manuscript of 1757 illustrates a totally different ordonnance flag with a white cross and alternating red and green cantons