The regiment was formed on September 11, 1684 from the third battalion of Piémont Infanterie and took the name of the Province of Cambrésis. Indeed, expecting a Coalition to soon form against France, Louis XIV raised 30 new regiments from September 1 to 30 for the defence of the various places of the realm. By raising one regiment a day, he avoided any problem of precedence among them. The regiment was given to the Comte de Châteaurenaud.

In 1742, during the War of the Austrian Succession (1740-48), the regiment served in Flanders. In 1744, it took part in the defence of the province of Alsace. In 1745, it took part in the capture of Kronembourg; in 1746, in the sieges of Mons, Charleroi and Namur and in the Battle of Rocoux; and in 1747, in the defence of Provence and in the conquest of Nice. In 1748, the regiment was attached to the Army of the Var.

During the Seven Years' War, the regiment ranked 80th and was under the command of:

In 1756, the regiment was stationed in Bretagne.

By August 1, 1757, the regiment was with the French army on the Weser. It then took part in the conquest of Hanover. At the end of the year, it took up its winter-quarters in Germany in the first line of the French Army in the area of Langenwedel near Verden.

In April 1758, when the Comte de Clermont redeployed his army along the Rhine, the regiment was stationed in Borth and Ossenberg near Krefeld. During the night of May 29 to 30, a battalion of the regiment, posted at Homberg and Essenberg, was surprised and put to flight by Wangenheim at the head of a small Allied detachment who had crossed the Rhine. After the successful crossing of the Rhine by the Allied Army of Ferdinand of Brunswick on May 31, the regiment retired towards Rheinberg where it joined Clermont's Army on June 2. It remained in this camp until June 12 and was placed in the centre of the first line. On August 5, its grenadier company was detached from Cologne to form part of Chavigny's advanced guard and took part in the combat of Mehr where it was engaged in the fighting inside the village.

In May 1760, the regiment embarked for Ile de France and India.

In 1763, the regiment returned to France (it would be sent back to Saint-Domingue the next year). 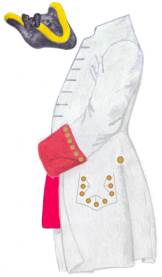 The colonel flag was white with a white cross.