Up to the reign of Louis XIV, to the exception of the Gardes Suisses, no Swiss regiment had been maintained on a permanent basis in the French Army. They usually served for four years before being sent back home and replaced by new units. In 1671, Louis XIV charged Pierre Stuppa, a captain in his Gardes Suisses, to negotiate with the Swiss Cantons the creation and cession of four regiments. Contracts were signed on August 14 of the same year. The four regiment arrived in France at the beginning of 1672 and were admitted in the French service on February 17. The present regiment was initially under the command of François Pfiffer de Wyher.

In 1683, the regiment contributed to the capture of Courtrai and Dixmude. In 1684, it covered the siege of Luxembourg.

In 1719, during the brief war between France and Spain, the regiment took pat in the sieges of Fuenterrabía and San Sebastián.

In 1729, the regiment changed its name to Burky.

In 1733, at the outbreak of the War of the Polish Succession (1733-35), the regiment the regiment quit its quarters in Roussillon and took up quarters in various places in Languedoc. In 1734, it embarked at Toulon for Italy. It initially occupied various posts in the regions of Modena and Mantua, before garrisoning Guastalla where it lost 1,300 men to illness.

In 1736, the regiment returned to France where it took up quarters at Perpignan, Collioure and Montlouis.

In 1738, the regiment, which was now known as Tschudy, was sent to Embrun.

In 1740, at the outbreak of the War of the Austrian Succession (1740-48), the regiment changed its name to Vigier. It 1742, it was sent from Embrun to Toulon. In 1743, it formed part of the Army of the Alps but was sent back to Provence after suffering heavy casualties in an attempt to cross the Pallion River. In 1745, it recrossed the Var River. In 1746, one of its battalion took part I a raid on Acqui and then the entire regiment took part in the siege of Acqui. The the 1st and 2nd battalions took part in the Battle of Rottofreddo. In 1747, it was at Hyères and in 1748 at Chiavari.

From 1751, the regiment was successively stationed at Lyons, Belfort and Lille.

During the Seven Years' War, the regiment ranked 52nd and was under the command of:

In 1757, the regiment initially served with the Army of Germany, taking part in the capture of Wesel where it remained in garrison. Somewhere between August 23 and September 6, the regiment joined the Army of Saxony, led by the Prince de Soubise, in the area of Erfurt and Eisenach. On September 27, it was brigaded with Cossé Brissac Infanterie and La Viefville Saint-Chamond Infanterie under Prince Camille in the second line of the left wing of the Franco-Imperial army. On November 5, under the Comte de Lorges, it took part in the disastrous Battle of Rossbach where it was placed in the second line of the centre. In this battle, it lost Captain Dieffenthaler wounded and taken prisoner; Grenadier Captain Reich and Lieutenant Muller, killed; Captain Waldner and one lieutenant wounded. At the end of the year, it took its winter-quarters on the Fulda River in Hessen.

At the end of January 1758, the regiment was assigned to the army that Louis XV planned to send to Bohemia for joint operations with the Austrian Army. However in March, during the surprise Allied winter offensive in West Germany, the regiment retreated towards Düsseldorf and Deutz with the bulk of Broglie's Army. It passed the Rhine on April 3 and 4. By July, it had joined Soubise's Army assembling near Friedberg in Hesse. On October 10, it was present at the Battle of Lutterberg where it was placed in the centre of the first line.

On April 13 ,1759, the regiment took part in the Battle of Bergen where it formed part of the third line of the right wing under the command of Prince Camille de Lorraine. The regiment was deployed in column behind the village of Bergen. In June, during the French offensive in Western Germany, the regiment was part of the main army under the command of the Marquis de Contades where it was deployed in the second line, on the left wing of the infantry centre. The regiment then took part in the defence of Wesel, threatened by the Hereditary Prince of Brunswick.

On February 15 1761, the regiment took part in the Combat of Langensalza. On September 13, the grenadiers and chasseurs of the regiment distinguished themselves at the affair of Naensen. 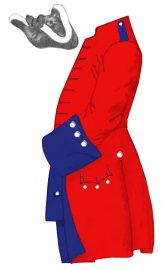 Colonel colour: white cross with the motto “Castella tuetur propugnacula” on the horizontal and vertical branches; each canton carrying 7 white flames.
N.B.: white colour with a white cross as per the manuscript of 1757

Ordonnance colours: white cross with the motto “Castella tuetur propugnacula” on the horizontal and vertical branches; each canton carrying 7 flames (red, yellow, blue, white, blue, yellow, red).
N.B.: white cross without motto; each canton decorated with 8 alternating blue and red flames as per the manuscript of 1757