During the dark age of the decadence of the Spanish monarchy, when obedience fell in disgrace and a bad spirit of provincialism was a real menace for the work of unification of the catholic kings, when the flames of war devoured the hearts and Catalonia and Flanders were ravaged, when loyalty was as changing as a flag on wind, turning as fortune, the plan to create a well disciplined unit was conceived. The aim was to raise a regiment capable of a valid service and able to protect his majesty body person. This was the origin of the king’s own regiment.

The question of the origin of the regiment was a difficult and contradictory one. The people were instinctively afraid of a military force who could be used in a repressive way. Also a number of high dignitaries of Spain were against the project of the comte duc de Olivares, for fears that the already powerful minister intended to create a “praetorian” guard for himself in order to become “invincible”.

Philip IV when in Catalonia, in 1632, decided to raise a unit composed of veteran soldiers in order to reduce the complete lack of discipline in the army. The marquis de Castrofuerte and Don Juan de Castro y de Castiglia were put in charge of the task. A first staff company of 140 men was stationed in Almansa. A request asking for volunteers was dictated and sent to general captains and majors of the cities. Problems soon aroused related to the double aspect of creating a new “elite” unit and its political and military implications.

This was the origin of the old King’s own Regiment, often referred as “immemorial”. The use of such a term, indicating something that was so old that it was impossible to ascertain its origins, gives a poor idea of our knowledge, revealing not only a complete impotence to find the historical documents out but, also of the laziness or the wrong directions of the students.

By chance all the documents we have found out are authentic and are a firm base. So the title “immemorial” should be avoided as far the king’s regiment is concerned.

Glory and merits were a characteristic of this unit, raised to be the most regarded formation of the Spanish army.

The tercio of the XVIIth century

The regiment of the XVIIIth century

During the War of the Spanish Succession:

In 1715, rest and refit were needed. The government decided to merge to the ancient colonelcy de la Guardia, and the regiments of Guadalajara and Madrid. Two battalions of the first formed the second battalion of the “Regiment of Castilla”. The Regiment of Madrid’s soldiers formed the third battalion. Soon after, when also the regiment of Guadalajara was reorganized, according to the Royal Order of March 26, the third battalion was disbanded and the personnel transferred to the second battalion of the “Regiment of Guadalajara. Embarked at Barcelona and reached Mallorca on June 8, where a feeble resistance was encountered. Alcudia and Palma were soon occupied.

In 1717, the regiment went back to Barcelona where the forces of its two battalions were augmented with 260 men.

In 1718 at first, the reasons of an augmentation of the force were not fully understood. The regiment was, in secret, embarked for southern Italy. The expedition, under the command of the general Marquis of Lede had to conquer Sicily. The army landed in Capo Zafferano and soon reached Palermo. The town was occupied without bloodshed. Austrian forces projected a last stand in Messina. The fleet brilliantly operated a second landing near the Faro and soon Messina was under siege. The town surrendered, only the citadel resisted for a while. The grenadiers company of the regiment suffered severe losses when an entrenchment was stormed on September 28. In Milazzo the regiment performed well, under command of general Armendariz, when on October 5 , with the “Regimiento de Guardias” it stormed a fortified house defended by two austrian battalions. Lieutenant-colonel Don Juan Bautista Merano was granted the privilege to bring in Madrid the official news of the victory.

In 1719, the regiment manned the Franca Villa line of defence, going from Scaletta, to Taormina and San Alessio where a bloody battle was fought on June 20. After heavy fighting, causing severe losses on both sides, the Austrian forces retreated.

In 1720, the imperial forces regrouped and attacked the Spanish lines near Palermo. Actions were limited to a heavy and futile cannonade between opposing batteries and small parties actions. An armistice was signed on May 1. The regiment went back to Barcelona on May 17.

In 1721, an epidemy broke out in Marseille. The regiment was sent to act as a sanitary cordon.

In June 1722, the regiment was quartered in Vich.

In 1723, after a few months, the unit was transferred to the province of Aragon. The battalions were separated, the first assuming garrison duties in Zaragoza and the second in Puigcerdà.

In 1725, the whole regiment garrisoned Valencia then, the first batallion was sent to Mallorca via Barcelona. The second battalion was distributed between Berga, Seo de Urgel and Cardona.

During the War of the Polish Succession:

In 1740, the regiment assumed garrison duties in Lérida. It was then transferred to Manresa on March 1.

During the War of the Austrian Succession:

In 1749, the regiment left the kingdom of Naples and sailed for Barcelona. On its return to Spain, it was assigned to the guard of the bridges of Olot, Sarria and San Martin where general Walmareck inspected it. Then, the fist battalion garrisoned Lérida while the second assumed garrison duty at Mataro.

In 1750, the entire regiment garrisoned Barcelona. A detachment went to Ocaña to receive the new training copied from the Prussian army.

In 1757, the regiment was first transferred from Barcelona to Tortosa and then to Valencia where the two battalions arrived on June 15 and June 25.

In 1761, the regiment assumed garrison duties in Catalonia and Ceuta.

In 1762, when war broke out with Portugal, the regiment moved to Algeciras to join the Spanish army assembling there for the projected invasion of Portugal. Soon Almeida surrendered and the regiment then manoeuvred in this region under colonel brigadier O'Reilly. At the end of the war, the regiment first went to Badajoz and then to Zafra. 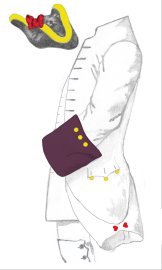 The conde de Clonard indicates that the distinctive colour of the regiment changed from purple to scarlet red in 1755.

As per an État militaire, towards 1750 the coronela (colonel flag) of the regiment was white with a red Burgundian cross terminated in each corner by a medallion carrying the arms of Castilla (golden castle on a blue field) surmounted by a golden crown. In the middle: the arms of Charles III surrounded by the necklace of the order of the Toison de Oro (Golden Fleece).

As per an État militaire, towards 1750 the batallonas (ordonnance flags) of the regiment were white with a red Burgundian cross terminated in each corner by a medallion carrying the arms of Castilla (golden castle on a blue field) surmounted by a golden crown.

N.B.: the arms of Castilla are usually represented on a red field but it seems that, during this period, a blue field was used.

Dr. Marco Pagan for the translation of the section of the work of the conde de Clonard dedicated to the “Rey Regiment” (formerly “Castilla Regiment”).